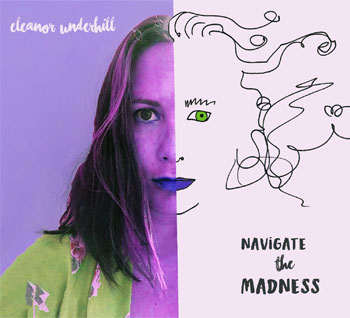 Underhill Rose enjoys well-deserved popularity and success for its music. Since coming together on the campus of Warren Wilson College nearly a decade ago, Eleanor Underhill (vocals, banjo) and Molly Rose (guitar, vocals) have won critical and commercial success. The duo’s three studio releases and their 2016 live collection (partly recorded at the much-missed Altamont Theatre) have served to raise Underhill Rose’s profile.

For all its charms, though, Underhill Rose’s music fits neatly into the Americana, folk and bluegrass genres. The duo’s place within that musical sphere is well-established; a brief but stellar set at the launch party for Billy Edd Wheeler’s memoir Hotter than a Pepper Sprout in April was a wonderful reminder of that.

Perhaps not surprisingly, Eleanor Underhill’s own musical inspiration and inclination extends beyond those styles. For her first solo release, Navigate the Madness, the artist has recorded a clutch of songs that she freely admits “didn’t fit with Underhill Rose.” Taken as whole, the songs display the deep well of creativity possessed by the Asheville-based musician.

“Imperfect World” is built atop a waltzing beat that suggests country and western, but the song features atmospheric, distorted guitars deep in the mix; they soar subtly through the tune, a song that recalls vintage Emmylou Harris with more of a rock sensibility. Some adventurously dissonant backing vocals give the song an unsettled air.

There’s a smoky, jazzy ambiance to “Stranger Things Have Come.” Even when Underhill’s signature banjo appears, it has an exotic feel that suggests Indian musical textures. Underhill’s sultry vocal is entrancing, and the other instrumentation – organ, perhaps a bit of synthesizer – is more felt than heard. Swirling, otherworldly vocals wrap around a bizarre piano solo and more unidentifiable (but wonderful) sonic elements.

“Never Meant to Say Goodbye” is as close as Navigate the Madness comes to a traditional love song. The song’s chord structure recalls early 1960s girl-group singles, but the wide-screen production and percussive brushwork takes the song someplace else; saxophone and chorus vocals place the song in the tradition of Nina Simone, and then a synthesizer solo yanks it back into the 21st century.

If Suzanne Vega made a habit of including banjo on her albums, she might come up with a song like “Hard to Find.” The track starts out with sounds that draw from trip-hop, but the melody and arrangement quickly veer back into more traditional singer-songwriter territory. Underhill makes intelligent use of the spaces between the notes; the silent and quiet parts of the song are essential to the whole.

“Cold Wind Blues” is indeed a torchy blues, with a style that combines hot jazz, Spanish guitar, tasty yet understated horn charts, surf guitar, synthesizers and … more synthesizers. It’s a jaw-dropping instrumental tour-de-force. “Into the Unknown” continues Underhill’s dizzying display of creativity; one moment the arrangement is skeletal, with little more than voice and banjo. The next, overdubbed vocal harmonies and faraway saxophones float effortlessly into the mix.

Some campfire-style harmonica introduces “Before I Head West Again.” Once the full instrumentation comes in, the cowboy feel falls away; in its place is adult pop of the most polished and sophisticated sort. A brief linking track, “Clouds in the Water” features bits of electric guitar fed through effects; it’s vaguely reminiscent of the sort of music Brian Eno made in during his mid 1970s pop trilogy period.

Fans of Underhill Rose’s signature style get a treat with ‘Notifications,” a song built around vocal and banjo. But even here, Underhill adds electric bass and ghostly backing vocals. The topical “Captured in Arms” features the interplay of analog synthesizer and banjo; from a commercial perspective, it may well be the album’s breakout track.

“You Know I Would” starts as a song that would fit comfortably into the Underhill Rose repertoire, adding softly honking saxophones and light-touch synthesizer work to the banjo-led melody. Once again it’s the rich vocal work that provides the song’s most alluring characteristics, but the sax solo that winds through the tune’s final minute is a treat as well.

Navigate the Madness concludes with “First Frost,” a meditative and melancholy number. For most of the song’s five-plus minutes, Underhill’s solo voice is the focus, but the final moments of the song feature wordless vocals and understated reappearance of most of the instruments that have adorned the album’s previous tracks. Toward its end, the song seems to float off into the ether.

Listeners whose musical appetites are strictly limited to a diet of Americana may find Navigate the Madness too eclectic and adventurous; those with even a slightly open mind will likely embrace the album and hope for more along the same lines from Underhill in the future. It’s encouraging to witness an established artist take on an ambitious project such as this; it’s even more rewarding to experience the fruits of that endeavor.