Gar Ragland is deeply immersed in multiple endeavors that skillfully combine commerce and creativity. The ripple effects of his efforts are often far-reaching, providing tangible encouragement and assistance to rising musical talents. Some of his projects are high-profile, while others are understated, even under wraps. And though his career path has had its share of twists and turns, with the benefit of hindsight it looks remarkably linear; each step forward appears a logical progression. 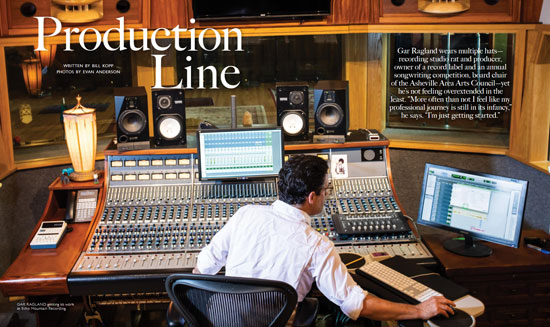 An edited version of this profile appeared previously in Capital at Play Magazine.

Ragland was born and raised in Winston-Salem, where he quickly developed an interest in all things musical. “I fell in love with music—and the performance aspects of it—at an early age,” he recalls. He took guitar lessons, and became more serious about playing music while in high school. “When I went to the University of Virginia in the early ‘90s, I started playing gigs for the first time,” he says. Ragland mostly played cover songs on acoustic guitar, performing at coffee houses and bars. “But I was getting paid,” he says with a laugh. “I was drinking for free, though I wasn’t even 21 yet. And I thought, ‘Yeah, I could get used to this.”

Virginia is for Players
The music scene in Charlottesville was thriving, and Ragland became part of it. “I was very active playing in different bands and solo projects,” he says. Hometown heroes the Dave Matthews Band was starting to come together, and most of the local musicians knew each other. “I knew Dave when he was still a bartender downtown,” Ragland recalls.

By his senior year, Ragland was getting gigs both on and off campus, and out of town. “We were working with two agencies that were booking us for private parties and clubs from Auburn, Alabama all the way up to Princeton, New Jersey,” he says. “We did a lot of fraternity parties, and the money was great for a college kid. We played a combination of covers and originals; it was party music.”

Things took a turn after Ragland graduated in 1993. He had studied pre-med as an undergraduate, eventually majoring in environmental science. He enjoyed the field research that was part of his studies. “I spent a lot of time in Shenandoah National Park, studying chemical hydrology and the effects of acid rain on the native trout population,” he says.

But by the time he was set to take the MCAT (Medical College Admission Test), he realized he didn’t want to continue in that direction. “I just did not have the focus, the discipline and the passion for that any more,” he says. “I was all-consumed with music.” So he decided not to go to medical school.

“In retrospect, it was a great decision,” he says, reflecting on what a career in medicine might have meant. “I think I would be a much less happy person than I am now. I’d probably have more financial security, but that’s the trade-off, right?”

Ragland remained in Charlottesville for the next four years. “I decided that I wasn’t ready to enter the workforce.” So using the college town as his base of operations, he continued to play music and tour. “And that’s when I started to get interested in the production side of things,” he says. “It’s where art and science come together.” His interest in physics led him to become intrigued with the scientific aspects of audio recording technology. “So I would just pick up a piece of outboard [recording] gear here and there,” he says.

Digital recording technology was in its infancy, but that’s the direction Ragland pursued as he learned his craft. “At the time, we used ADAT machines that took VHS tapes,” he says with a chuckle. “Not a very sexy medium. But then the Hi-8 format came out, and I got a lightweight multitrack machine.”

Ragland’s interest in (and appreciation for) traditional tape-based analog recording technology wouldn’t come until much later. “I’ve come sort of full circle, I guess,” he says. “I recently bought a quarter-inch, two-track machine, and that’s what I print all of my mixes on now.”

Conservation to Conservatory
During that period as he developed his audio engineering and production skills, Ragland was mostly recording his own music. “I didn’t get into producing other people until later,” he says. And at the same time, he began to get restless, thinking it might be time to enter the “straight” workforce. “I started to get hungry for the real world,” he says. “I was thinking, ‘What does a real job look like?’”

He found balance. Ragland lived three days a week in Charlottesville, working on music, and lived with his girlfriend in Washington, D.C. the other four days. There he worked for an environmental policy think tank, Resources for the Future. “It’s not an advocacy organization,” he emphasizes. “They just look at the numbers and call it like it is.” His work involved cost-benefit analysis of regulatory scenarios for power plant sulfur emission.

Ragland characterizes the think tank’s activities as “super-important work done by really cool, down-to-earth economists. And a lot of the work that I was doing required keen attention to detail,” he says. “That really honed that sort of muscle in my brain. So now, for every project I apply a sort of economic modeling perspective.” He finds that the discipline of looking holistically at problems and issues serves him well in his music business endeavors, and in life in general.

The economists were very supportive of Ragland’s music career. “So when I came back to Virginia, I still rented my little cottage on the outskirts of Charlottesville on this beautiful horse farm,” he says. “The guest bedroom was my recording studio.” As much as he enjoyed the work—not to mention the steady paycheck—at Resources for the Future, music still exerted a strong pull. “It was something that I couldn’t shake; I needed to engage more deeply in my relationship with it,” he says.

He began to think about graduate studies in music, and then he learned about a program at the New England Conservatory in Boston. It was a course of study under Rand Blake, based on what Ragland calls Blake’s “very eccentric methodology of intensive ear training.” He applied to the two-year program and was accepted. And repeating his pattern of sticking around longer than expected, Garland ended up working and studying in Boston for eight years.

“It was transformative,” Ragland says. While there, he was able to plunge deeply into the production side of music. “Working with my classmates and members of the department, I had an incredible opportunity to do a lot of recording work, and to hone my skills.” He set up a recording studio in a space inside a large warehouse used by bands for rehearsal. “I’d just bring all my friends over there—a lot of rock bands and whatnot—and I really cut my teeth as a producer.”