Los Lobos is an American treasure. Formed in East L.A. in the early 1970s, the band has always drawn from across the entire spectrum of American music. While the group’s Latino roots invite easy comparison to groundbreaking acts like Thee Midniters, El Chicano, Malo and Santana, the group (whose name means “the wolves”) has always been about much more than one strain of music. 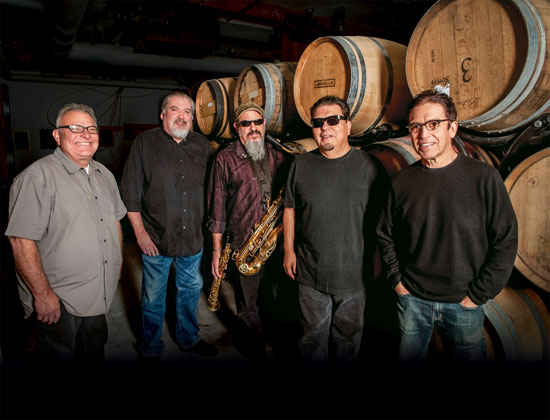 As applied to music, the term Americana is often used to describe a style that focus on the roots and branches of American cultural traditions. And because the music of Los Lobos is authentically flavored with everything from early rock ‘n’ roll to zydeco to conjunto to jazz to country, a better label (if one is needed at all) might be norteAmericana. The band’s major-label debut, 1984’s How Will the Wolf Survive? Brought Los Lobos to national attention; in 2003 the record was named among the top 500 albums of all time by Rolling Stone.

Though the lion’s share of the band’s material is original music (written mostly by band members David Hidalgo and Louie Pérez), Los Lobos sometimes applies its substantial talents to interpreting the work of others. The two most notable examples are a 1988 album of Tejano and Mariachi folk sung entirely in Spanish), La Pistola y El Corazón, and the group’s work on the soundtrack of the 1987 Richie Valens biopic La Bamba.

But it’s Los Lobos’ original songs that come in for the acclaim. 1992’s Kiko earned almost unanimous critical plaudits, but all of the group’s 20-plus releases have been well received. An engaging live act, Los Lobos recently made an archive of more than a half-dozen live albums from across the band’s history available via iTunes. And while there hasn’t been a new studio album since 2015’s Gates of Gold, but the band took part in an intriguing Record Store Day release earlier this year, a cover of the Shins’ song “The Fear.”

Grammy-winning writer Chris Morris’ book about the group, Dream in Blue was published in 2015, and earlier this year, Pérez published a book of his own, Good Morning, Aztlán: The Words, Pictures and Songs of Louie Pérez. After returning from dates in Scandinavia, the group kicked off a tour that will crisscross the U.S., keeping the band busy well into 2019. In late October the group sailed from San Diego as part of the annual Legendary Rhythm & Blues Cruise, underscoring Los Lobos’ genre-spanning appeal.