So much good music has found its way into my ears in 2018. As the year winds toward its close, I’d like to share words on a few of these with you. All titles noted below are on vinyl (LP or 7′ 45 RPM single). 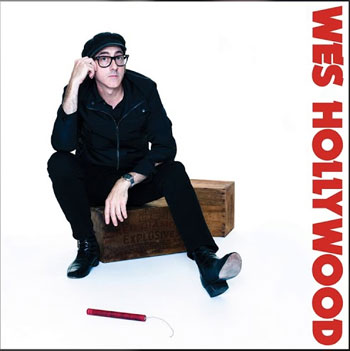 Wes Hollywood – Dynamite
It was more than six and a half years ago – an eternity in the world of popular music – that I received an inquiry from one Wes Hollywood. Shortly theater he mailed a review copy of his 2012 album Fantasy Arcade. I really dug it, and promptly gave it an enthusiastic review. That was that, however. I happily added the 2LP set (the album in both stereo and monaural configurations) to my shelf and went about my business. Happily, I recently heard from Hollywood again in December; I now hold in my hands his second full-length, Dynamite. Like its predecessor, this new record displays Hollywood’s spare, nervy and direct powerpop. Though its title is slyly clever, “£4.20” is itself a straightforward tune. “When Sunday Rolls Around” is a memorable, moody, minor-key, slow-burning rocker. The 12 songs are varied; the unifying quality is, well, quality. Dynamite’s unadorned production keeps the focus on the songs themselves. While the vibe is very much 1979 new-wave, the production aesthetic is timeless; this record will sound as good six and a half years from now as it does today. Hopefully Wes Hollywood won’t take that long to release another album. Meantime, get this one. 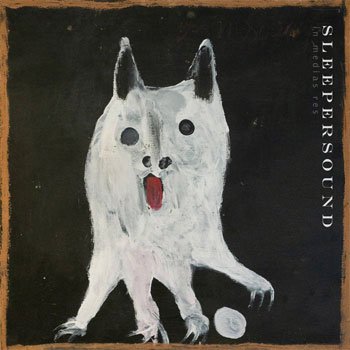 Sleepersound – In Medias Res
The album title is Latin for “in the middle of things.” This six-song album – a bit long for an EP – features impressionistic, guitar-based tunes reminiscent of The Church circa Gold Afternoon Fix. There’s a bit of a shoegazy vibe to the songs, but they’re more gently melodic than that label might suggest. The vocals are awash in a gauzy instrumental haze. The somnambulant feel of “Passengers” features squalls of distorted-yet-faraway guitars, drumming that has a Revolver-esque tripping-over-itself feel, and more echo-chamber vocals. “Gravity Well” peels back the gaue, but just a bit, adding in hypnotic processed sounds and a more sinister feel. “Terminals” opens with a friendly, unplugged feel, with precise guitar picking, wood block percussion and breathy vocals, but by its end (it clocks in well over seven minutes) its a soaring, squalling shoegazer. Some appealing bits of synth crop up near its close. “Slow Moon” is heavier on atmospherics than melody, but it succeeds on that level. “Error Tape” is the most Church-y tune on the set, all impressionistic sonics, gently picked electric guitars, cymbal-less percussion and dissonance. All told, Sleepersound’s In Medias Res is a nice way to spend half an hour. 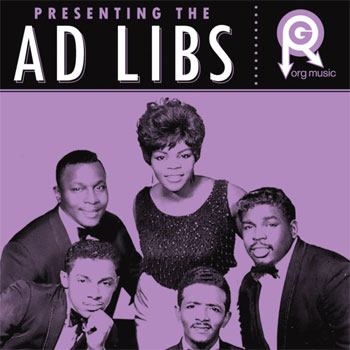 The Ad Libs – Presenting the Ad Libs
Like (I suspect) most people, my only knowledge of The Ad Libs is their 1966 hit single, “Boy From New York City, “a tune that got a new lease of life when covered by the Manhattan Transfer. What little I had read about the group led me to think of it as existing safely inside the confines of doo-wop,a genre that – while not without its charms – doesn’t greatly intrigue me. So it was with diminished expectations that I spun a new vinyl release. Happily, the 13 cuts on this new release from Org Music – the first-ever album-length compilation of Ad Libs tracks, so I am to understand – are much more varied than standard-issue doo-wop. There’s a Motown feel to some of the tracks, and the vocal group’s five-person lineup (four guys and a gal) affords them a lot of versatility. The music is made for dancing, and it’s fun start to finish. This compilation doesn’t seem to be quite exhaustive, but it does include the highlights of the group’s work for Blue Cat and Share Records, both part of Shelby Singleton’s music empire. 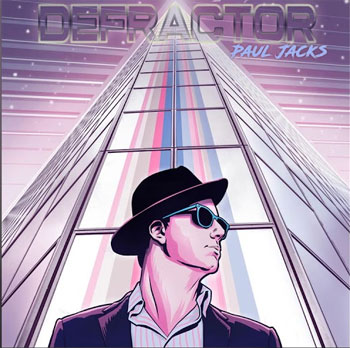 Paul Jacks – Defractor
The pulp/comics cover art of this new release led me to suspect something ina vaguely techno-soul vein, and upon further investigation, turns out I wasn’t too wide of the mark. This relatively brief (eight songs, 30 minutes) LP is very much in an early ‘80s retrosynth style. Imagine Human League, Thompson Twins and Gary Numan all wrapped together and given a commercial-leaning polish. The songs are chiming, dance-ready mid-tempo tunes in which Jacks’ vocals are often as not just part of the overall sonic stew. The sleeve doesn’t provide copious information; it was recorded in Anchorage, Alaska, and – one can assume – Jacks is playing everything. As a retro exercise, it’s quite successful. There nothing about Defractor (other than perhaps the heavyweight vinyl pressing) that suggests it was made after 1982. If you’ve already copped all those Depeche Mode and OMD records, Defractor will fit nicely alongside those records. 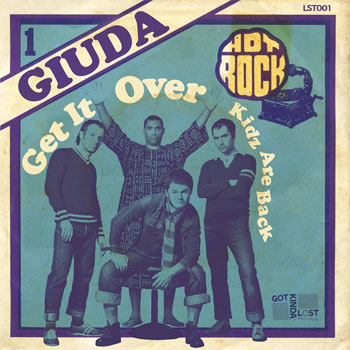 Giuda – “Get Over It” b/w “Kidz Are Back”
This Italian punk act released a 45 RPM single in 2010, but there’s nothing about this pair of songs (both clicking in under two minutes) that sounds modern. Which is all to the good: the stomping, hand-clapping “Get It Over” sounds like Rome’s bubblegummy answer to Slade or Sweet. Some very retro-sounding synth and “round-style” vocals complete the effect, with a bit of Gary Glitter-style “Hey!” and Sweet-like mid-song band instruction providing the cherries on top. The b-side is a punkier take on the same aesthetic. A delight. 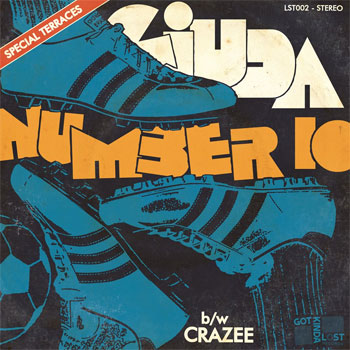 Giuda – “Number 10” b/w/ “Crazee”
Here are two more songs from the Italian retro band, newly reissued on the trendy, tastemaking Got Kinda Lost label. If anything, “Number 10” is even more assured than the above single; it’s also more timeless. These guys are clearly having fun, and so will you. Rarely has a bass solo (admittedly a very brief and simple one) been so appealing. The simple-minded “Crazee” is equally wonderful. If the Bay City Rollers had a bit of snarl, they might have sounded like Giuda. One, two, three, four, go buy this now. 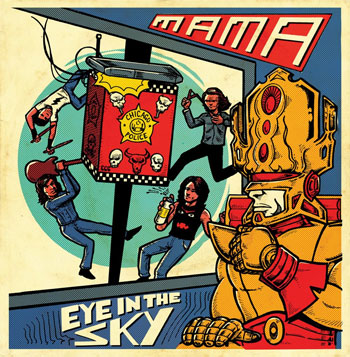 Mama – Eye in the Sky EP
Got Kinda Lost’s third release after the above two, Eye in the Sky is most definitely not anything like Alan Parsons Project. Imagine pilled-up, high-octane melodic rock of the MC5/Stooges variety, with a pop strong sensibility. Mama sounds like the product of the New York Dolls crossed with Material Issue. If that sounds appealing – and it damn well should – you need this. This Chicago band plays at the speed of Husker Du, but with the swagger of Cheap Trick. The twin lead guitars of “Lazer Lover” sound like Thin Lizzy on amphetamines. “Some Weird Sin” sounds a bit like ‘70s glam; “Girls Next door” is amped-up classic Midwestern powerpop a la Blue Ash. The title track features some heroic guitar posturing and drums that suggest (here’s that name we try to avoid, again) Gary Glitter.