Near the end of the 1980s, local Asheville guitarist Warren Haynes organized an informal musical get-together. Conceived as an opportunity for touring and journeyman musicians to congregate during the holidays – the one time each year when many of them would return home – the Christmas Jam would eventually evolve into something much grander. An event benefiting Asheville Area Habitat for Humanity, Warren Haynes’ Christmas Jam celebrated its 30th anniversary this year on Friday, Dec. 7 and Saturday, Dec. 8 at the U.S. Cellular Center. 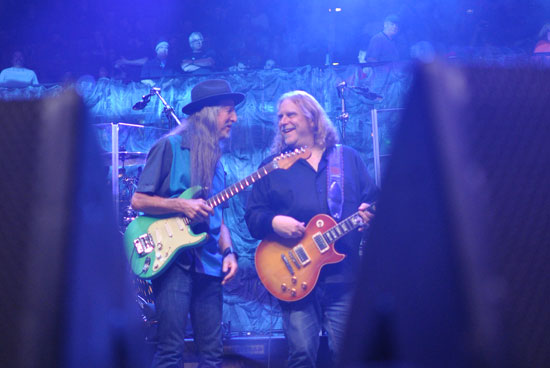 The earliest Christmas Jams took place at long-gone bar 45 Cherry, now the site of a parking lot for AT&T employees. Haynes makes clear that the original goals for the event were quite modest. “It was never thought of like, ‘Oh, we’ll do it the next year or the year after,’” he says. A bit of money was raised for various nonprofits at the earliest Jams, but all aspects of the event were decidedly informal.

The Christmas Jam soon grew in scope and popularity, eventually moving to a slightly larger downtown venue, Be Here Now. But soon even that club was insufficient. “The dressing room was so tiny that there wasn’t even enough room for the musicians performing, much less anyone else,” Haynes recalls with a laugh. “That’s it,” Haynes’ wife Stefani Scarmado told him. “We’re going to change this and make it more of a national event. Let’s move it to a bigger place and rethink what it is.”

By 1994 the local Habitat nonprofit was selected as beneficiary of the event’s proceeds. For Haynes, it was an easy decision. “One of the many things that I love about [Habitat] is that you see what’s being done,” he says. “You see where your money’s going, and you see the progress that’s being made.”

Held at the Thomas Wolfe Auditorium for a few years, the Jam next moved to the larger Civic Center – a venue no more than 500 feet southeast of where 45 Cherry once stood – in 2001. Drawing upon Haynes’ ever-growing roster of musical friends and associates, the Christmas Jam team assembles a bill of top-quality performers for each year’s event. Lining up the artists is an ongoing effort. “I start making phone calls as early as April or May,” Haynes says.

The money raised is put to good use locally. Asheville Area Habitat for Humanity Communications Director Ariane Kjellquist says that the Jam is the nonprofit’s largest annual contributor, raising over $2.3 million to date. “If you look at that figure over all these years divided by the $55,000 sponsorship cost of a home, it comes out to over 40 houses a year that are attributed to the Christmas Jam,” she says.

Haynes takes an active role beyond organizing the Jam; he’s met with many of the people who have benefited from Habitat’s programs aimed at making a dent in the disparity between local wages and housing costs. “I was always very aware of how important Habitat’s mission is, but when I started meeting the families, it made it more personal,” he says. “And it’s very humbling.”

And since 2007, another event centered around the Jam has provided a means for volunteers to help support Habitat’s work. “Before the Jam, Lend a Hand” takes place at Habitat’s construction and home repair sites in Arden, and at the organization’s ReStore in Biltmore Village. Kjellquist estimates that the volunteer initiative will draw 120 participants this year. Those taking part “share a common interest in music, and they’ve integrated volunteerism into their overall Christmas Jam experience,” she says.

But the centerpiece of the entire fundraising initiative was the annual concert. To commemorate the Jam’s 30th anniversary, this year’s festival was spread across two nights at the Civic Center. “This will only be the third time we’ve done that,” Haynes says.

“Each year, we try to figure out ways of making it more special, more fun, more of a destination event,” says Warren Haynes. “We also get better at keeping expenses down and raising more money for Habitat.”