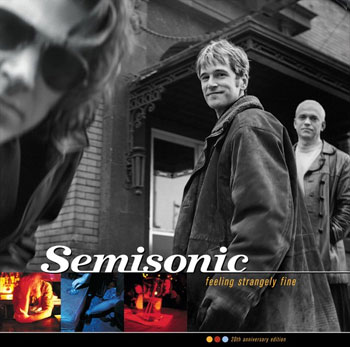 Certain music becomes an exemplar of the time in which it was made and released. If the artist involved is lucky, that music not only evokes memories of that period, but also withstands the test of time. To qualify for the latter, the music must somehow avoid at least some of the trappings of its era of origin, earning the descriptor timeless and escaping the epithet dated.

From my perspective, Semisonic’s 1998 album Feeling Strangely Fine meets all of those high criteria. A three-piece, Minneapolis-based Semisonic featured Dan Wilson on guitar, bassist John Munson and Jacob Slichter on drums. Wilson and Munson had played together for years in the critical darling (but commercially overlooked) Trip Shakespeare; Semisonic was – whether its members planned it as such or not – a more commercially-friendly refinement of their old band’s approach.

One hesitates to employ the word formula when discussing music-making – especially when one has great admiration for the musicians and music under consideration – but there is a kind of template for many of the songs on Feeling Strangely Fine. In some ways, it fits into the “don’t bore us / get to the chorus” approach used so effectively by Raspberries in the early 1970s. Semisonic’s songs on its second album are models of economy; the hooks come right at the listener (often in the first few bars) and the memorable choruses come around quickly.

Much of Trip Shakespeare’s endearing quirkiness is absent in the music of Semisonic, bit all of that earlier band’s charm and knack for melody remains intact. The lyrics – all by Wilson – are a near-perfect balance of cleverness and repetition. Take “Singing in My Sleep” as one of eleven examples on Feeling Strangely Fine. A verse includes a quick reference to the Capulet family, familiar to lovers of Shakespeare’s Romeo and Juliet. That’s not the first time Wilson would ti his hat toward the bard; he did it I nhis old band (at least once) as well.

And the latter is exemplified in what – in less assured hands – could be a risky approach. The chorus of “Singing in My Sleep” is little more than a sentence with that phrase, repeated several times. But against the backdrop of the soaring band arrangements – thank the band aided by producer Nick Launay for those – the repetition is a pleasing feature, not a bug.

The album’s opening track, “Closing Time” was a substantial hit on its original release. Most casual listeners won’t know much of Semisonic’s body of work beyond that tune. And while “Closing Time” is a fine song in and of itself – nearly a power ballad but with more verve and spirit than that type of song can typically muster – it’s not the best track on Feeling Strangely Fine. That honor goes to one of two other tracks.

“Never You Mind” is one of the most uptempo cuts on the album, and it’s a showcase of all of Semisonic’s myriad strengths. The playing and arrangement are superb:finely nuanced yet powerful. Wilson’s writing is clever and memorable, with quick references to classic Star Trek masterfully woven in. And Wilson’s vocal is a thing of beauty, demonstrating his seemingly effortless ability to climb to his highest register and then back down again. Munson and Schlichter provide expert vocal support throughout. Piano – a key component of many of Feeling Strangely Fine’s songs – is front and center, and (coupled with Slichter’s taut yet splashy drumming) Munson’s thundering bass lays down a wonderfully thick bottom end. A middle-eight worthy of Lennon and McCartney As it races toward its premature end, “Never You Mind” scales heights of pop grandeur that stand up well against Jellyfish, another of the late ‘90s best acts.

Whether it was Semisonic’s intention nor not, “This Will Be My Year” can be thought of as a kind of cousin to the Zombies’ “This Will Be our Year.” The Semisonic tune is a slice of transcendent pop, with a keening synthesizer line snaking through the song. Slichter’s insistent snare drives the song forward, forward, forward while Wilson spins out his wordy lyric. When the breathtaking yet simple and straightforward chorus comes around, you believe what Wilson sings.

The rest of the record is more than strangely fine as well; “She Spreads Her Wings” is a lovely John Muson showcase. The acoustic guitars-and-string-section “Gone to the Movies” is achingly beautiful. “DND” sounds like a single but that description applies equally well to many of the other cuts on the album. In fact, three singles were release from Feeling Strangely Fine, and all three charted: “Closing Time” (#1 Alternative, #13 Mainstream), “Singing in My Sleep” (#11 Alternative, #31 Mainstream) and the anthemic “Secret Smile” (#21 Alternative).

To the shock and dismay of fans – this one at least – Semisonic’s third album All About Chemistry failed to perform commercially in the U.S. Despite a single (“Chemistry”) that rivaled the best from the second record (and wickedly clever cover art), it wasn’t as well-received. Semisonic broke up (or went on hiatus; you pick) shortly thereafter.

Happily for fans of some of the qualities that made Trip Shakespeare and Semisonic special, John Munson teamed up with Matt Wilson (Dan’s brother and a founding member of Trip Shakespeare ) in the – here’s that phrase again – criminally overlooked Twilight Hours. To date Twilight Hours has released two albums (Stereo Night and Black Beauty) that are sure to please fans of any of these Minneapolis-based musicians.