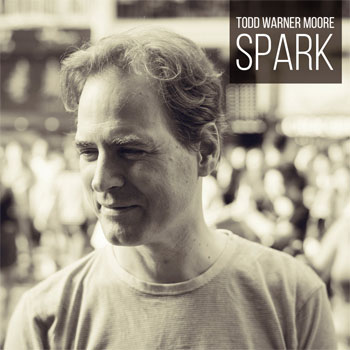 When an album of music opens with a spoken-word prologue, it positions itself as, well, a certain kind of album. And Todd Warner Moore’s Spark starts just that way, hipping new listeners to the fact that this is likely to be a somewhat literate, story-based collection of songs. And that’s about right. There’s a strong Celtic folk vibe to these songs, leavened with relatively modern-folk arrangement and production values.

Moore is American-born, but he’s an American of the well-traveled sort, and that quality informs his music in positive ways. Spark, his second album, draws from world folk traditions, but Moore’s songs don’t really have any kind of world-dilettante vibe. He’s often joined on vocals by Leah Hart, who’s billed in the credits for “backing vocals” but often rises to the level of duet singer. The shimmering acostic gutiars nad soothing string accompaniment (violin, viola, cello) all combine nicely to create an easy listening sort of modern folk-pop.

The songs are economical affairs; none extends past the four-minute mark. His songwriting is consistently appealing, with only a rare misstep (the too-cute “Noodles”) impeding the flow. But tunes like “Do You Really Know” more than make up for the occasional mawkishness. A live track (“The Lens”) provides strong evidence that Todd Warner Moore and his music are best experienced up-close and personal, but for those not traveling to Hong Kong (his current residence) Spark is the next best thing to being there.