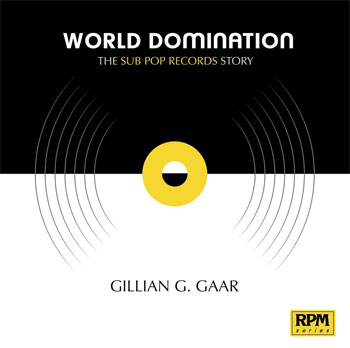 The stories of record labels are intricately woven into the more generalized history of pop culture. Theirs are a mixture of commerce and creativity, especially when focusing on independent labels. One of the most important and consequential indie labels of the modern era is Seattle-based Sub Pop. Part of a new series under the umbrella RPG from the new publishing arm of BMG is Gillian G. Gaar’s World Domination: The Sub Pop Records Story.

Gaar is a veteran musical journalist with several books to her credit. But what makes her uniquely qualified to write a definitive history of Sub Pop is her Seattle connection; Gaar has long been an up-close and personal witness to the ups and downs of the label most closely associated with the grunge rock movement.

At just under 150 pages, World Domination is a quick read. But within that relatively slim volume, Gaar has packed a detailed and colorful history of the label’s origins, development, fall, and rebirth. Drawing on a wealth of new, first-hand interviews as well as archival material, Gaar digs into the Sub Pop story. The book reads almost like an oral history; while Gaar never shies away form making astute observations, for the most part she lets the principals tell their stories.

Gaar has clearly developed a good working relationship with Sub Pop principals, especially co-founders Bruce Pavitt and Jonathan Poneman, but also current CEO Megan Jasper. The latter has been closely connected to Sub Pop for decades, even before she worked ofr the label. The input of those three (and quite a few others) is key to Gaar’s chronicle, and their unique (and sometimes at-odds) perspectives are woven together skillfully.

While Sub Pop was home to many important acts (Nirvana, Mudhoney and so on), World Domination focuses more on the label than upon the special story arcs of the bands. But those whose interest lies primarily in band stories will still find much to appreciate within the pages of the book. The reader will likely come away impressed with the story of how the label grew from humble beginnings into a world-class entity, and will likely take note of the fact that – through the tough and lean times, and through an eventual partial-buyout by a major label – Sub Pop has nonetheless managed to maintain its family atmosphere. As a number of the key players in the story note within Gaar’s book, more than a few acts who started on Sub Pop only to leave to the majors would eventually return “home,” as it were.

BMG is to be commended for launching the RPM Series; the stories of labels – especially indie ones – has heretofore gone largely untold. In Gillian Gaar’s capable hands, the Sub Pop story has now been told in a manner befitting the label’s important place in music history.