John Lydon Tells It As It Is (Part One)

Crawling from the wreckage that was the Sex Pistols, vocalist Johnny Rotten reverted to his given name and put together a new group, Public Image Limited. PiL drew from dub reggae and disco, filtered through sheets of dissonance and Lydon’s trademark vocals. Through fits and starts, the band released a string of albums and unlikely hit singles before folding in the 1990s. After a self-enforced break of nearly two decades, Lydon reformed the band in 2009, and a stable lineup has been touring and recording ever since. Concurrent with the release of a career retrospective box st and documentary film (both titled The Public Image is Rotten) and a U.S. tour, John Lydon sat down for a freewheeling and candid discussion with RNRG, opening up about PiL’s catalog, fatherhood, and his relationship with his parents and fans.

Do you hear the influence of PiL in the work of other artists?

Yeah, I can hear the influences. But that’s fine. I mean, it’s there: it’s a landscape, a collage of notes. What music really is, is a collection of oddball noises put into some semblance of a structure – usually, not always – that somehow that relates to a human emotion. And that’s where we are, what we specify in this particular terrain. It’s not a happenstance or a vague simulation of an idea when you explore emotions; you delve right deep inside them. I certainly do, and that’s why I don’t think our lyrics are flippant. I don’t think our music is flippant. I think it’s studied and analyzed and achieving positive results. And you can’t do that if you’re trying to assimilate other people’s genres.

And from where do you draw influence?

Oh, all and everything. I grew up admiring Mozart. Particularly “Requiem,” which is one of my favorite all-time pieces of music. It’s something I played continuously when my father died. 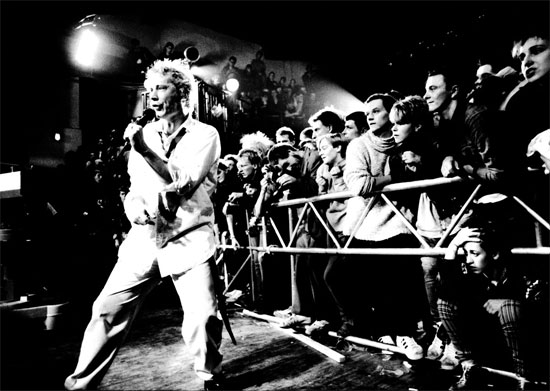 It was done in a very different way. Some members had left by then, or had gone off for whatever saucy ideas of reality they had. So I more or less did that completely alone with an engineer called Nick Launay. I had just escaped a prison sentence in Ireland, being found, of course, not guilty of attacking two policemen’s fists with my face. And went straight into the studios; I basically got off the plane and we just went straight in. I wanted to work, and I couldn’t get anybody really interested, so I had to just kind of play bits and pieces myself. That was a real learning curve there of the incorrect use of a bass, a guitar, a piano with ashtrays on it, and bits and pieces of drums.

I’ve got to say thank you to Martin Atkins; he laid down just three or four basic drum rhythms. I asked him to do it then, because he was going off on tour himself with his own band. So there it goes; we used loops and everything else you can care to mention. We just madly experimented. And I thought that was an amazing achievement as a record, as a soundscape. I was really just expressing my joy at not being locked up for years

In the big picture, would you say that your approach to the studio is pretty much to just make use of what you have at hand?

Absolutely, yes: catch as catch can. What’s instantly available is what you work with. If this is the hand of cards you’ve got and you’re in a gambling game, go gamble.

Live in Tokyo (1983) was recorded with what has been characterized as a pick-up band. It came in for some criticism. With the benefit of hindsight, how do you look upon that brief chapter in the group’s history?

I think it’s very entertaining and enjoyable, because again we’re breaking the rules. I had to work, I was committed to doing those gigs, and I went forth in any way I could with whatever tools were available. It’s the same mentality; you don’t call it to a halt just because the situations around you are not particularly beneficial; you just make the best you can with what there is.

Looking back, is there anything in the PIL catalog that you would disown? Or do you stand by all of it?

No, no, no, nothing that’s got my name firmly stamped on it, no. I’ve never released what I thought was underwhelming.

Opinions are mixed on it, but I absolutely love the Album record from 1986. There is something delightfully perverse in using Tony Williams, Steve Vai, Ryuchi Sakamoto and Ginger Baker as session players on a PiL record.

Yeah, which I fully understand and comprehend. I agree that’s a bit of a shocker for most people because they presume, “Oh, you went out and got the best people there are.” Well I didn’t deliberately. The band I had was very, very young at that time, and they could not cope with the studio pressure in New York. The whole thing overwhelmed them and they fell apart when it came down to laying down the basic backing tracks.

Now, the money was as tight as a sack of assholes, so I had to immediately go to desperate measures and put heads together with [producer Bill] Laswell. He just made phone calls to see who’d say yes. And bloody hell, no one was more shocked than me to know Ginger Baker was more than willing and loved the idea! And so there you go. It’s like, “Ouch, yes … but will he get the drum part?” Well he did, didn’t he? And that made for, I’d say, just a damn exciting record. Because we were all on edge with each other.

I’m aware the quality of the people I’m working with was on a level I’d never attained to that point, but also mentally and physically I was kind of drained. Because eventually the negativity does wear you down and you begin to doubt yourself. I was definitely in a period there of thinking I wasn’t good enough, but these chaps more than happily reminded me that I was. Quite a brilliant psychology session really; they bumped me up no end. And then they all of them loved the idea of not mentioning their names because the album was supposed to be completely generic. You just wouldn’t know who was on it, and so we thought that would be fine; the music stands alone.

No, it didn’t: Elektra decided to drop us. And they had no concept of who they were actually dropping. Was it coincidental that Johnny Rotten is the only one they know and they’re quite happy to get rid of him?

No, no, no … because they were instantly and quickly available. And Laswell knew Ginger Baker was in town for that week so that was that. It was like, “Is he worth a call?” And I’m thinking, “I dunno. I mean, who knows? Just for the insults it might be hilarious.” If you don’t ask you don’t get.

Was there ever any thought given to taking PiL on the road with some of those people?

No, no. I couldn’t afford that for starts, and secondly to go out it would end up as some kind of supergroup. And that’s not where I’m at. I’d much rather go back into the shadows and re-think it all and so something completely different. I mean, on the Album album there’s “Round.” That’s my answer to Bob Dylan’s “Blowin’ in the Wind.” But with less of the farting.

On the 1987 album Happy? you move pretty close to what I would call pop melodies. A tune like “Seattle” is catchy in a way that your earlier material often isn’t.

I love pop music. I always have, you know? T. Rex and Bowie and all of these things. I love the innocence of the simple rhythm, just a few words that can absolutely mean a lot to a young person. And when we dabble with pop, it’s really a re-enactment of our own childhoods that we’re seeking, that blissful ignorance of the cruelty of the bigger world.

Do you feel the responsibility to not repeat yourself in music?

No, I don’t. Occasionally I’ll pick a line out of an old song and throw it right smack into a new one because I want to use it as a reference point. In the same way, I love to dabble with terminologies like clichés. I love to see how I could turn them upside down and spin them around and somehow formulate a sense of irony in them. You say one thing, but really you mean something else, and hopefully that would be clearly understood. Didn’t always, of course.

I’m just one of those complicated thinkers that kind of confuses himself sometimes. Kind of like a Robin Williams; you know that constant agitative way he had as a comedian, his mind would just run rampant when let loose. Well, that’s very much like what goes on in my head all the time. I always had great empathy for him as a comedian; I loved him live. I could keep up with those, what we call them, “train stations of thoughts.”

You took time off from PiL to raise [lead singer of the Slits and daughter of Lydon’s wife] Arianna’s kids. How do you think parenthood changed you as a person?

Well, if only those kids could learn to listen! [Laughter] Yes, I endured everything that every parent ever went through. I used the whole scenario as a learning curve for myself and my relationship with – particularly – my father. We were always at ends with each other, and he was always trying to agitate me and annoy me. But I look back at it now and I think, “My God, I’m doing the same thing!” Only I’m doing it to make them wake up. Maybe that’s what he was doing with me, but it’s quite an amazing discovery, really. And oh gosh, I miss him so much now; I’d love to go back in time and sort out that I was the asshole, not him. And so it’s a very, very, very sad thing to come to grips with, but I think that’s really what all children will do with their parents eventually … well, all us lucky ones. There are more than a few bad parents out there, but most are the ones that really are trying to strive to wake you up and make you think for yourself. Well, I had a pair of them.