The Who’s ‘Who Are You’ at 40: More Songs About Songs and Songwriting 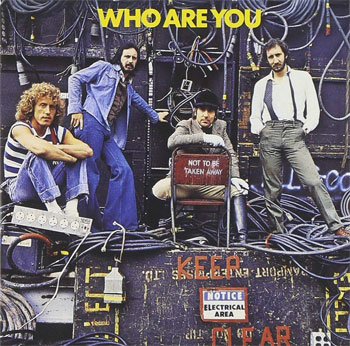 The late 1970s represented an uneasy time for The Who. The decade had begun auspiciously, with the group riding high on a critical and commercial wave; the success of 1969’s Tommy was followed by three smash albums: Live at Leeds (released 1970), 1971’s Who’s Next and Quadrophenia from 1973. But when The Who By Numbers appeared in 1975, it displayed a set of songs that explored guitarist and primary songwriter Pete Townshend’s unease in dealing with middle age. The upbeat single “Squeeze Box” notwithstanding,” The Who By Numbers laid bare Townshend’s uncertainty as to where and how he and his band’s music fit into the era.

For all intents and purposes, The Who went to ground after touring in support of The Who By Numbers. Nearly three years would pass before the release of the group’s eighth studio album, Who Are You. From the title on down, the album makes plain that Townshend’s concerns about his own relevance have not been resolved.

By the time of Who Are You, punk rock was on the rise in both the U.S. and Great Britain. Townshend in particular had always been a keen observer of the music scene, and he followed punk with interest. That interest – and the fact that at least some of the prominent figures in the punk scene sought to distance themselves from “dinosaur rock,” a category into which The Who were sometimes lumped – was a mixed blessing for him. On one hand, it seemed to cause Townshend to wonder if perhaps his time had passed. On the other hand, it spurred him on creatively – both musically and lyrically – to create songs that explored these issues.

The first sound heard on Who Are You is a slashing guitar glissando that bracingly introduces the record. “New Song” is characterized musically by a dialogue between Townshend’s guitar and his overdubbed synthesizer. As the song unwinds, John Entwistle’s bass and Keith Moon’s drums assert themselves, but musically it’s a Townshend showcase. Meanwhile, Roger Daltrey – the undisputed master at delivering Townshend’s words – outlines the group’s continued ambition in the face of a changing musical landscape. A dreamy bridge provides sharp contrast with the powerful attack of the rest of the song, and Daltrey provides a pair of none-too-subtle connections the The Who’s past: his repeat of “let it rain” is a nod to Quadrophenia’s transcendent “Love Reign o’er Me,” and a scream that concludes the bridge hearkens back to the most thrilling moment of the already pretty damn thrilling “Won’t Get Fooled Again” from Who’s Next.

As a Rolling Stone reviewer noted decades ago when reviewing John Entiwistle’s solo albums, The Who bassist had the misfortune of being a very good songwriter in a group that also happened to have a great one. Entwistle’s three contributions to Who Are You represent a full third of the album’s content, and suggest that the group recognized the quality of his material. (Or, perhaps, that Townshend was having trouble coming up with songs that made muster. Or maybe a bit of both.)

The synthesizers that provide the primary rhythmic element for the bassist’s “Had Enough” are very much of their time, but the textures have aged surprisingly well. As a lyricist, Entwistle doesn’t concern himself here with the angst that pervades Townshend’s work; instead he writes a first-person tale (sung by Daltrey) that’s almost a companion piece to Townshend’s “Behind Blue Eyes” from Who’s Next. Ted Astley’s breathtaking string arrangement adds a soaring element to the song, as do the close vocal harmonies. In place of a guitar solo, strings and brass take center stage, and they work exceedingly well.

Entwistle’s “905” is slightly less successful, though its off-kilter science fiction tale (again sung in first person, but this time by the bassist himself) is intriguing. Townshend adds splashes of guitar processed through unusual-for-the-time effects, including one quite similar to an effect Wings’ Jimmy McCullough (an occasional Townshend associate) used on Wings at the Speed of Sound’s “Wino Junko.” Appropriately enough for a sci-fi theme, synthesizer textures are prominent.

But “Sister Disco” takes The Who’s use of synthesizers to a new level. Townshend’s anthemic lyric isn’t exactly a repudiation of disco music (though the “disco sucks” movement was at its height around this time) but it is a clear statement in support of rock. A complex ARP 2600 keyboard sequence carries the song along, with Townshend, Entwistle and Moon seeming to chase after it. Once again Townshend displays his mastery of the bridge (or “middle eight” as the Beatles called it) that he sings in this song-about-music. High energy passages alternate with quiet, acoustic guitar interludes and a second bridge, this time sung by Daltrey. A simple guitar chord sequence – one recalling the band’s earliest singles – is successfully grafted onto a tune that moves in several directions at once. “Sister Disco” represents some of the most ambitious moments found on Who Are You. Townshend’s chorus specifically references Tommy (“deaf, dumb and blind”), and in a delightfully perverse move, the song ends with just an acoustic guitar.

Keith Moon was in the depths of his struggle with alcohol abuse during the making of Who Are You. While flashes of his drumming brilliance do crop up from time to time, he’s largely out to lunch. And on “Music Must Change,” he’s all but absent. Daltrey’s powerfully strident vocals declaim Townshend’s musical statement of purpose (another song-about-music). The song rocks in seething, understated manner, occasionally exploding with punchy brass figures. Townshend adds some clever licks on guitar, most notably one that follows a lyric about mice; for a brief few seconds, his guitar effectively evokes the feel of scurrying rodents. Elsewhere on the tune, his playing almost jazzy.

One of the best songs from the sardonic pen of John Entwistle, “Trick of the Light” is an uncompromising rocker. Daltrey sings the bassist’s lyrics, which in this case express more angst and self-doubt than is typically Entwistle’s wont. When the chorus asks “Was I alright?” it expresses vulnerability. The use of cliché (“What’s a nice girl like you doing in a place like this?”) makes perfect sense in the context of the song.

The more nuanced moments of Quadrophenia are echoed on “Guitar and Pen,” another Townsend song about songwriting. The song’s arrangement increases the intensity and it builds toward the conclusion of each verse, and the instrumental breaks that follow each verse feature gurgling synthesizer and a guitar with a complimentary character. Guest keyboardist Rod Argent (Argent, the Zombies) provides a delightful piano break. Daltrey sings sweetly at the top of his range, effecting a menacing growl during the choruses. Moon does a good job with his signature fills, but there’s a sense that he’s out of breath. Not surprisingly, his drums seem lower in the mix than on previous studio albums.

“Love is Coming Down” is a lovely song, though it’s perhaps not best suited for the talents of Roger Daltrey. Because he’s again singing at the top of his range, Daltrey’s vocals take on a fragile, pleading quality. Townshend’s introspective lyric and melody echoes the soul-searching moments of “Is It in My Head?” from Quadrophenia. Ted Astley’s stirring string arrangement is a thing of beauty. “Love is Coming Down” isn’t exactly rock ‘n’ roll, but it does draw viscerally from the best of that tradition. Townshend doesn’t seem here to be writing in a strictly autobiographical manner, but his fears and insecurities are nonetheless on display.

Who Are You concludes with its most well-known song, the title track. Forty years on, it’s difficult to convey just how unusual “Who Are You” sounded on first listen. A synthesizer and chirping vocal chorus introduces the song, but Townshend’s slashing, stinging lead guitar gives the song its fire. Daltrey’s snarling lead vocal is one of his best, and Keith Moon turns in his last great drumming performance. Even through its repurposing as part of the opening title sequence of the long-running TV crime drama C.S.I., “Who Are You” still sounds fresh today.

While Who Are You was a deep look inside Pete Townshend’s internal dialogue concerning his (and The Who’s) future, it doesn’t provide pat, easy answers. As a listening experience, it may not rank at the top of the group’s efforts, but in the context of its times, it’s a superb – sometimes great – collection of songs built largely around a unified theme.

Who Are You was released August 18, 1978, into a marketplace that included Boston’s Don’t Look Back, DEVO’s debut album, Donna Summer’s Live and More. The album reached #2 on the Billboard album chart, and the single “Who Are You” reached #14 in the U.S. Exactly three weeks after the release of Who Are You, drummer Keith Moon died from an overdose of a prescription drug designed to combat alcoholism.