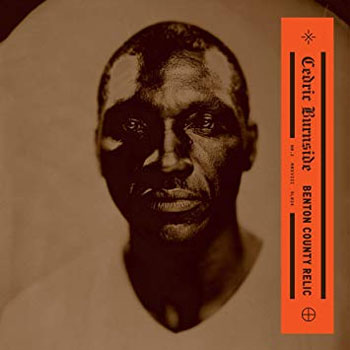 As the grandson of famed bluesman R.L. Burnside, multi-instrumentalist Cedric Burnside has quite a legacy to live up to. But as a three-time winner of Drummer of the Year at the Memphis Blues Awards, he’s his own man. And his 2015 album Descendants of Hill Country earned him a Grammy Nomination. But all along he has acknowledged his roots: Burnside paid fitting tribute to his famous forbear with the autobiographical “R.L. Burnside” on 2008’s Two Man Wrecking Crew, a guitar-and-drums collaboration with Lighnin’ Malcolm.

That instrumental setup has found itself played out by far too many rock and blues-rock duos, but with Benton County Relic, the young Burnside demonstrates there’s plenty of life left in the format. Working with fellow drummer-guitarist-vocalist Brian Jay, and recording both in Brooklyn and at Memphis’ famed Ardent Studios, the pair makes a finely textured, stomping record. “We Made It” opens the 12-song collection in style, and the unalloyed, crunching vibe continues apace all the way to the album’s conclusion.

The songs demonstrate a healthy variety in arrangement, subject matter, and vibe: “Get Your Groove On” delivers on its title. “Typical Day” feels like a Muddy Waters-style blues classic. And the languid “Hard to Stay Cool” oozes menace and mystery as it spins out Burnside’s statement of purpose. Elsewhere, more familiar sentiments like “Don’t Leave Me Girl” are delivered in an arrangement that seems to suggest additional instruments that aren’t there; working together in an audio verité production style, Burnside and Jay somehow sound like a larger ensemble.

The album’s songs are divided into two sets — like an old vinyl LP — and each set is identified with a symbol; one is a stylized sun or star, the other likely a moon. From that we can infer that the songs are thematically grouped according to subject matter or feel; it’s true that the second set (containing cuts like “Death Bell Blues” and “I’m Hurtin’”) is a bit darker in tone than the first, but setting the player on shuffle won’t lessen the impact of this collection of original material one bit.