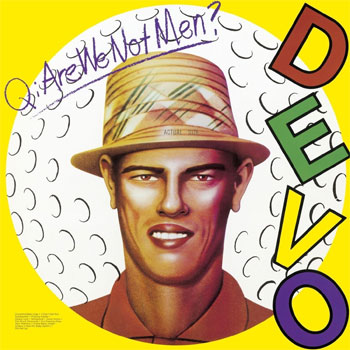 The passage of time can do some odd things to our perspective. Things that were once radical and groundbreaking can seem commonplace. It’s sometimes difficult, then, to look back upon the release of an album and examine it with the same framework of understanding one had on first hearing it. A good example of this phenomenon is the Sex Pistols’ long-playing debut (and only album-proper, for that matter), 1977’s Never Mind the Bollocks, Here’s the Sex Pistols. When that album was unleashed on a largely unsuspecting public, most had never heard anything like it. The album was raw and loud in the extreme, and it felt to most—whether they loved it, despised it or fell somewhere in between—like something they had never heard before.

While Never Mind the Bollocks is an undisputed classic, today it sounds almost ordinary. The cumulative experience of hearing all that came in its wake (or at least after it) has smoothed many of the album’s sharper edges. That’s not to take anything away from the record’s specialness; it’s only to point out that more than 40 years after its release, the Sex Pistols’ album doesn’t provide the same left-field, what-the-hell-is-this experience it did in ‘77.

Less than a year after Bollocks came the debut album from an Akron, Ohio group. Devo’s debut is the exception that proves the rule: on the 40th anniversary of its release, Q: Are We Not Men? A: We Are Devo! is every bit as strange and untethered from convention as it was in 1978.

With the benefit of some four decades’ hindsight, it’s clear that the middle-late 1970s was an era of some musical ferment. But much of it was bubbling under, not perceptible to the everyday pop music consumer. Today we look back on David Bowie’s series of albums from that period—Low, “Heroes” and Lodger—as a thematically connected set of releases. We even refer to them as the “Berlin Trilogy.” Bowie’s work, friendship and associations with Robert Fripp, Brian Eno and engineer Conny Planck would quietly exert a great influence that extended far beyond the relatively modest commercial performance of those records.

Bowie and his pals had their collective antennae out for other artists who were doing interesting things, too. Beyond their now well-known and celebrated connections to relatively high-profile artists like Lou Reed and Peter Gabriel, they apparently also paid attention to the odd demo tape that found its way into their hands.

One of those was a tape from Devo. The creative collective was impressed by the off-kilter music, and a decision was made to produce an album. Owing to schedules and previous commitments, the responsibility for producing what would become Q/A (that’s how I’m going to abbreviate the album title) fell to Eno. Sessions took place in Cologne, West Germany, with Planck engineering*; Bowie dropped by when he could, and he ultimately acted as an uncredited co-producer.

Despite the way-out aesthetic of Devo and its music—one that might suggest a bunch of young musicians with little connection to the pop culture of the 1960s—two of the five band members were in fact inextricably tied to an earlier era. Gerald Casale and Bob Lewis (aka “BOB2”) were students at Ohio’s Kent State University at the time of the infamous 1970 killing of war protesters by members of the Ohio National Guard. In fact the tragedy had a sort of unintended connection to a half-serious conceptual theory cooked up by the pair. The group would take its name from the founding members’ “theory of de-evolution.”

On one level, Devo seemed hard to take seriously, and much about the band’s approach suggested they didn’t intend to be taken seriously. But deep inside their quirky lyrics and provocatively weird visual style was some sharply-executed social commentary about the vapidity of modern culture.

Listening now, “Uncontrollable Urge” has much in common with some of the nervier punk coming out of the UK; in particular, Mark Mothersbaugh’s yelpy vocal is reminiscent of Feargal Sharkey’s warble. But it’s worth noting that “Teenage Kicks,” the debut single from Northern Ireland’s Undertones was released in October 1978, more than a month after the release of Devo’s first record. The whip-fast delivery of the song’s melody was very much in a new wave/punk vein, but the song has a strong melodic line as well. The song is built around a riff identical to (and in the same key as) Led Zeppelin’s “Misty Mountain Hop.”

The nods—or sideways glaces—to classic rock continue. Devo’s radical deconstruction of the Rolling Stones’ “(I Can’t Get No) Satisfaction” likely angered many a rock purist when the band performed it on Saturday Night Live on October 14, 1979. Everything about the performance seemed designed to outrage, from the band’s hazmat-suit uniforms to the modifications made to their instruments (Jerry Casale playing a sawed-off Gibson Ripper bass? Effects pedals duct-taped onto guitars? Sacrilege!). Devo’s “Satisfaction” was a poke in the eye, a shot across the bow, a statement of purpose that made it clear the band would not play by anyone’s rules but its own. The stuttering, almost dub instrumental approach to the song suggests Eno’s influence; he would explore similar textures on his own “pop” [sic] trilogy of albums.

“Praying Hands” is equal parts rock melody and robotic sonic assault, and its brief lyric pokes fun at religiosity. Its start/stop approach is not miles away from the music on early albums from Swindon, England’s XTC, but that likely had more to do with shared influences than cross-pollination; XTC’s debut album was released right around the time Devo finished sessions for Q/A.

Other than Mothersbaugh’s distinctive vocals, “Space Junk” is relatively conventional rock, albeit rock of the excessively speedy variety. Eno adds synthesizer textures. “Mongoloid” is something else entirely; at first, its deliberately provocative lyric seems to be making fun of a genetic chromosome disorder; closer inspection suggests that—just maybe—the song is a wry commentary on the dysfunction of taking part in the modern-day rat race. The nasal vocals, keening synthesizer lines and boxy electronic (or at least electronically-treated) drums impart a cold, distant feel to the song.

“Jocko Homo” isn’t as lyrically offensive as its title might suggest, but to a generation raised on a diet of mainstream rock and pop, it may well have sounded like noise. A head-spinning guitar figure—answered by a similar melodic line on synthesizer—provides a decidedly unconventional backing for the song’s verses. An angular, descending riff acts as a kind of instrumental chorus. The song is more or less the group’s anthem (with its chants of “We are Devo”), and its lyric expands a bit (but not much) on the theory of devolution: simply put, we’re moving backwards, back toward primordial ooze.

The brief “Too Much Paranoias” sounds like a twisted parody of heavy metal, filtered through the wacky sensibilities of the group. In place of pig-squeal guitar solos, the song features what sounds like guitars being detuned. The lyric mentions a “Big Mac attack,” another reference to the disposable culture exemplified by McDonald’s fast food.

In the context of the songs on Q/A, “Gut Feeling/Slap Your Mammy” is weird precisely because it’s not. The opening guitar lick sounds like a variant of Hilton Valentine’s arpeggios on the Animals’ “House of the Rising Sun.” The catchy, comparatively conventional tune unwinds for more than two minutes before the lyric (a sort of anti-love song) appears. The first part of the medley descends into squalls of atonal guitar skronk as it segues into the brief, pogo-worthy second part. The Dead Kennedys’ Fresh Fruit for Rotting Vegetables wouldn’t be released until September 1980, but those who picked up Devo’s Q/A and listened to “Slap Your Mammy” got an advance taste of the San Francisco band’s sonic approach.

“Come Back Jonee” has a vaguely country and western vibe, and in retrospect can be seen as a kind of embryonic effort of the sort that would be more fully realized in the group’s biggest hit, “Whip It” from 1980’s Freedom of Choice. Lyrically, it’s a story song, perhaps a self-conscious attempt to write in a modern-day variant of Chuck Berry’s “Johnny B. Goode.” Some of the song’s riffs are mutated versions of Berry’s style.

“Sloppy (I Saw My Baby Gettin’)” is an off-kilter cousin to the style employed on the Stones cover, with multiple breakdowns that likely would have confounded those attempting to dance to the tune. It features a sparse, smutty lyric.

Q: Are We Not Men? A: We Are Devo! concludes with “Shrivel-Up,” a song that seems flown in from another album made by a different group. If “Shrivel-Up” sounds like anything else, it’s redolent of some of the early releases by Television; the New York band’s Marquee Moon was released in 1977. In any event, the spooky, understated vibe of the song wouldn’t represent a musical direction that Devo would pursue to any substantial degree.

Devo’s debut album wouldn’t make a serious splash on the charts; it reached only #78 on the Billboard album charts. The album fared far better in England where it made it all the way to #12. Q/A did in fact earn RIAA Gold status (500,000 units sold), but that certification came some time after the album’s release: in 2007, some 29 years after it first went on sale. But the influence—and the unyielding, enduring strangeness—of Q: Are We Not Men? A: We Are Devo! continues to this day.

* per the original LP sleeve.