Isbell is one of few artists in the Americana/country field to succeed on a large scale both critically and commercially. Still touring in support of his latest album, The Nashville Sound, more than a year after its release, Jason Isbell and the 400 Unit performed at Asheville’s Memorial Stadium Sept. 21. 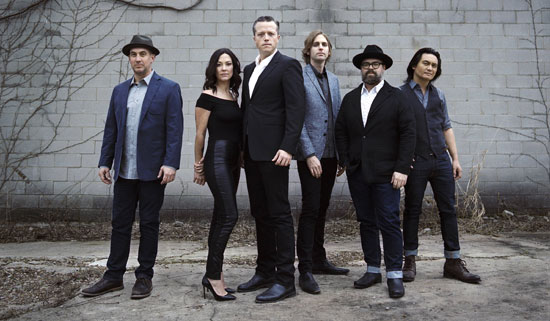 Isbell grew up in Green Hill, Alabama, just across the river for Muscle Shoals, home to the two celebrated recording studios, FAME and Muscle Shoals Sound Studio. Session bassist David Hood took the fledgling musician under his wing. In the process, he imparted some valuable lessons. “Show up on time,” Isbell recalls being told. “And make sure all of your gear works. Do that, and you’re already going to be way ahead of most musicians.”

Isbell laughs at the memory. “I got a kick out of that, but it’s true. And that’s the kind of guy David is: He just does whatever needs to be done, and he’ll let everybody else figure it out later.”

Hood — who remains an active musician today — played an important part in recordings by Aretha Franklin, Willie Nelson, Cher, Bob Seger, Traffic, the Staple Singers, Etta James, Percy Sledge and countless others. And the music made in Muscle Shoals exerted a major influence upon Jason Isbell.

The guitarist has definite ideas as to why the music recorded in the tiny North Alabama town is so quintessentially American. “There’s a lot of struggle in there,” he says. “And the combination of different ethnicities, musicians, producers, and songwriters were all trying to make music that had soul.”

In this case, Isbell isn’t using the term soul to apply to a genre of music, though. “I think that they were trying to make music that was honest and emotional,” he explains. “And I think being more concerned with manipulating people’s emotions than with selling millions of albums turned out to be a really good thing.”

That’s an approach that Jason Isbell has taken to heart. He spent six years in the Drive-By Truckers, the band led by David Hood’s son Patterson, but he placed only a handful of his songs on the group’s albums. “I knew the band was really stacked with quality songwriters,” he says. “So I didn’t want to bring in anything that was subpar; it took me a long time to write a good song in those days. I was still developing.”

Writing good songs seems to come easier for Isbell these days; The Nashville Sound secured the #1 spot on the indie, country, folk and rock charts. But his life hasn’t been without its own struggles; he battled alcoholism for many years before getting sober in 2012. For him, the best thing about putting those problems behind him is being able to be a good husband and father. “I’m glad that my daughter was born three years ago rather than thirteen years ago,” he says. “Because I wasn’t able to keep my own ass clean back then, much less somebody else’s.

Isbell admits that there is a downside to getting clean. “Men who are raised in the South aren’t given a lot of tools to actually discuss your emotional life and your interior life,” he explains. “And that was a lot easier when I was drunk. So once I got sober, I spent a lot of time trying to figure out how to function emotionally and be open with people.”

Isbell has succeeded on that score, too. A frequent visitor to Asheville since his days with Drive-By Truckers, the guitarist always looks forward to meeting up with old friends here. “My friend Doug Riley, who owns Asheville Pizza & Brewing, grew up in North Alabama,” he says. “We like to spend some time with Doug and hang out at some of his places. Asheville is a great town to just walk around in, taking in the beauty of the city and the strangeness of the people.”

But Isbell doesn’t partake of the products of the city’s famous breweries. “Even when I drank, I never really got into microbrews,” he says. “They always upset my stomach … probably because I drank a case of beer every time.

“One or two might not have caused me so much trouble,” he says with a chuckle. “But there we are.” Instead, Isbell takes advantage of another of Asheville’s offerings. “Asheville is like the brunch capital of the south,” he says. “So it’s brunch all the time for me. Constant brunch.”

Come back tomorrow for even more Jason Isbell.