The Mommyheads: Chill About Everything … Except Global Warming

Sweden has made important contributions to music. Stockholm-based 1970s pop juggernaut ABBA is so revered at home that the band has its own museum. So when Swedish fans take a strong interest in an American group, the rest of the world should pay attention.

NYC-based indie pop group the Mommyheads released five albums between 1989 and 1997, then the members went their separate ways. But they got back together in 2008, and have since released five more albums of new music. Soundtrack to the World’s End is their latest. All along, the band has been popular in Sweden, where their music is favorably compared to sophisticated, ambitious pop acts like XTC and Jellyfish. 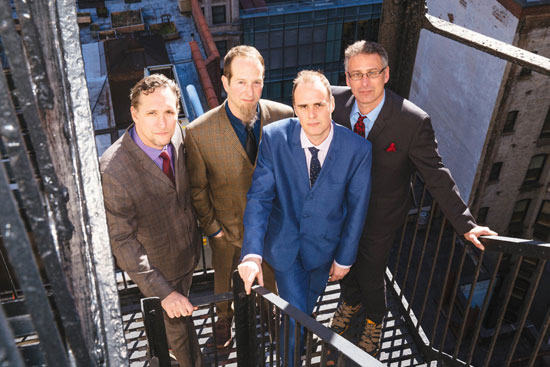 Guitarist Adam Elk says that a few influential Swedish musicians first discovered the Mommyheads on their self-titled 1997 album. “They probably found our record in the reject bins at record stores and wondered what it was,” he says with a chuckle.

But the group’s time on major label Geffen wasn’t a happy one, and that experience was a factor in the breakup. These days the band has a renewed sense of purpose. “Now, we’re much more chill about everything,” says keyboardist Mike Holt. “We do hope the latest album reaches new people, but we no longer have illusions or attachments about becoming stars. We’re mainly just in it for the joy of music.”

That joy is expressed in operating largely outside the machinery of the music business. “Those days are over,” Holt says. “But Adam still believes – somewhat – in the system.” That means making intelligent use of press, blogs, digital distribution and the like, “in the hopes that something will catch on, and that people we don’t know might actually show up at our shows and get our music online,” he says.

These days, the Mommyheads perform in and around New York City – and in Sweden, of course – in support of Soundtrack to the World’s End. The album title isn’t really political. “It’s more an ecological cry for help,” Elk says. “This is a tricky topic and way outside our comfort zone, which made it a huge but rewarding challenge.” The music is impassioned, catchy, clever and meaningful. The lyrics make their point, but in a tongue-in-cheek way: “The penguins are wearing bikinis up in the tundra,” for example.

Elk provides a good-natured warning. “If you’re a climate change denier, you probably won’t like this record.”