Gullah is a Creole language spoken in a concentrated geographical area, the low-country region along the Atlantic coastal islands in Georgia and the Carolinas. The Gullah people are descendants of 19th century slaves, and in addition to their language, they’ve manged to hold onto many of their cultural characteristics to present day. The band Ranky Tanky embraces, celebrates and shares Gullah culture through its music.

Growing up in Awendaw, South Carolina, Ranky Tanky’s trumpet player and vocalist Charlton Singleton grew up amid Gullah culture. It was so woven into the fabric of daily life that he wasn’t even aware of it. “Nobody even used the term ‘Gullah,’” he says. “We just did what we did.” 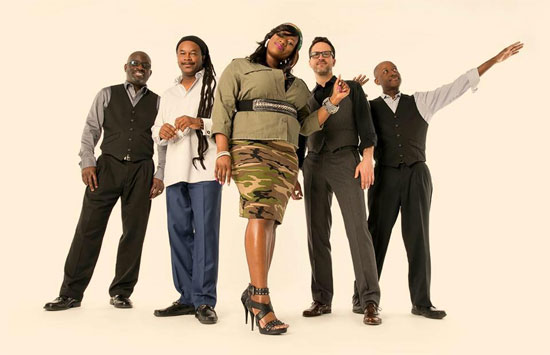 His grandfather grew up on nearby Capers Island, about 15 miles northwest of Charleston. Despite its proximity to a city, Capers Island remains quite remote: even today it’s accessible only by boat. There are no roads on the island, and other than campers, today it is unpopulated.

Singleton recalls stories that his grandfather (known as “Big Daddy”) would tell him. “When he was a little boy, he was living on that island with his siblings and his family,” he recalls. “A really big hurricane forced them to seek higher ground, so they got on a raft and floated over to the mainland. That’s how we ended up living in Awendaw.”

Gullah culture flourished there. “The way that everybody talks and lives, a lot of the things from the Gullah culture were prevalent in my community, and in a lot of the black communities up and down the whole South Carolina coast,” Singleton says. “The food, the arts and crafts, the way of life, the dialect … all of those things make up Gullah culture. And in Ranky Tanky, we interpret those things.”

In many ways, Gullah developed right alongside mass American culture; it simply expressed things in a different fashion. Singleton points out the name of one of the barrier islands, Daufuskie. It’s an English spelling of the Gullah expression “the first key,” or island north of the Georgia-Florida state line.

Half of Daufuskie Island is a country club and golf course. But the other half is an epicenter of Gullah traditions. Singleton says that even once one arrives there by ferry, “the roads are dirt. There’s no lighting on them. You have to live there to know where things are.” The island’s isolation is a key to its preservation of the unique culture.

And that relationship between Gullah and mass American culture carries over to music. Singleton recalls a time when Ranky Tanky guitarist Clay Ross showed him a song. “I was like, ‘Oh yeah, I know that song.’ And he said, ‘Really? You’ve heard this before?’” Singleton replied to his band mate, “Man, I’ve been singing that since I was three!”

Singleton says that the Gullah customs “are all in the oral tradition, so the authentic stuff has been passed down.” some things have been lost or reinterpreted, but Ranky Tanky does its best to capture the music the way it would have sounded generations ago.

One example is the group’s reading of “You Gotta Move.” Recorded by Sister Rosetta Tharpe in 1950, the song is perhaps most famous in its 1971 version by the Rolling Stones. The song actually dates back much farther to when it was an African-American spiritual. “They’ve been singing that in the Gullah community for years and years,” Singleton says.

The same holds true for another song in Ranky Tanky’s repertoire, “O Death.” Singleton notes that the song has been part of the Gullah tradition for generations, “years long before O Brother Where Art Thou? came out.”

Though it has been celebrated in popular culture, Gullah remains a mystery to most Americans. And it’s part of Ranky Tanky’s mission to educate audiences while they entertain and enlighten. Because sometimes people are confused. “I remember a man – God bless him – at a concert we did last year in the Midwest,” Singleton recalls with a laugh. “He said, ‘Is your music … goulash?’ I said, ‘No, sir; it’s Gullah. Goulash, that’s a straight-up food!’”

Singleton says that at a Ranky Tanky concert, “You’ll learn quite a bit of things that you might not know, and you’ll discover some things that you probably didn’t think of, and then you’ll think of them in a different way. The music is exciting; we have five musicians on stage, and we combine a bunch of different genres in order to present this music that’s guaranteed to please.”