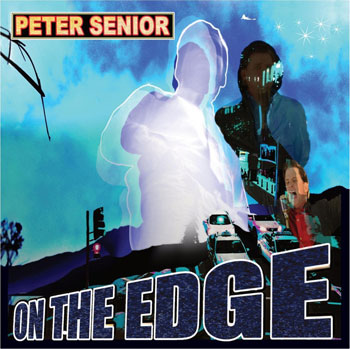 There’s a gospel feel informing “Little Lovin’,” the opening track of Sydney-based pop-rocker Peter Senior’s On the Edge. The uptempo tune has an arrangement vaguely reminiscent of Billy Joel’s forays into rock, but – unlike Joel – Senior seems quite comfortable in the vintage-flavored rock idiom. The chord progressions are warmly familiar, and the brass and vocal arrangements lean in a very commercial direction, with a slightly showy vibe. “Baby I Love you” isn’t the early rock classic; it’s a now song with a feel not miles away from that Brill Building gem.

Senior’s songwriting is sturdy and radio-friendly; if there’s a shortcoming to his work, it’s that it’s sometimes a bit too familiar; some of the songs sound as if they were written expressly to conjure the feelings – if not specific memories – of songs written a half century ago. His balladry – on songs like “Doin’ OK” – has the same qualities, evoking singer-songwriters like (early) Billy Joel. As On the Edge unfolds, it reveals more of Senior’s stylistic palette; bits of country even crop up on “Soft Rain.” The album often threatens to rock, but pulls back from the edge (so to speak).

My suspicion is – and I say this as a keyboardist myself – piano players have a particular musical vocabulary and/or set of tools that can empower them to write catchy melodies, but – with some exceptions – not ones that rock. But considered in the context of a rock-leaning keyboardist/composer with an appealing voice, On the Edge is a pleasing collection of tunes.