Throughout the first decade of the new century, Jamie McLean played guitar in beloved New Orleans institution the Dirty Dozen Brass Band. For the last several years, McLean has served as guitarist for another Crescent City legend, Aaron Neville. But alongside those duties McLean has long since established himself as a singer and songwriter in his own right. Touring in support of One and Only, the latest album from the Jamie McLean Band, the guitarist played at Asheville, N.C.’s Isis Music Hall on September 12.

McLean is a regular visitor to Asheville. With the Dirty Dozen Brass Band he played at the Bele Chere Festival in 2005; with his own band, he played that festival twice. When the DDBB returned in 2010 for that year’s Warren Haynes’ Christmas Jam, McLean was in the group as well. “I remember playing the Orange Peel a lot with them, too,” McLean says. “Asheville was always a regular stop.” 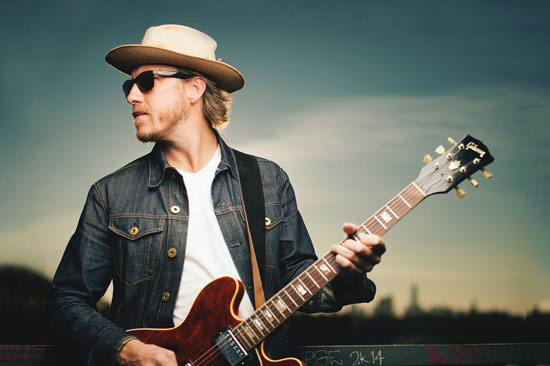 But he notes that for whatever reason, there was a gap of a few years when he didn’t play here. “But then last year, we played the Diana Wortham Theatre with Marc Broussard,” he recalls. “That was a sold-out show; people came up to the merch table afterwards and asked, ‘When’s the next one?’ So we quickly turned around and booked a show at Isis in May of this year.” And he’s coming back again.

Partly through his work with the DDBB, McLean has strong connections to the jam band scene. But the strong thread that runs through his work—especially on his studio albums—is an emphasis on concise songwriting. “ More than anything, I feel that the songs are the strongest part,” he says. “I always want to focus my energy on that.” He offers the example of one of his favorite artists, Tom Petty & the Heartbreakers. “They’re a prime example of a really great band with great songs,” he says. “They could be concise on an album, and then go rock the songs on stage. And that’s something we’re shooting for.

“But really, more than anything, I’m trying to focus on writing great songs,” McLean says.

In pursuit of that goal, the guitarist tries to create music that feeds listeners three ways. “The saxophone player for the Dirty Dozen used to say the band gives you something for the mind, for the body, and the soul,” McLean says. “And the biggest part of that is the soul.” He notes that hasn’t always fully appreciated those values.

“When I first joined the Dirty Dozens, I had been studying a lot and playing a lot,” he recalls. “A big part of my plan was trying to be flashy, playing a lot of notes and showing off all the stuff that I had been working on.” He laughs when he explains how that went over. “After my big long solo with all these notes, the baritone sax player would come out and play one note over and over and over and over. And the place would go crazy! I quickly realized that it’s not the number of notes; it’s the feeling that you put into it.”

And that feeling is something McLean tries to convey with his songwriting as well. Though he typically writes alone, in the months before making One and Only, he decided to try a different approach, co-writing. So he headed to Nashville.

“There’s a different creative thing that can happen when you get more than one person in the room,” he says. And while most of the songs on One and Only are the product of writing solo, McLean feels he learned a great deal in his Nashville songwriting sessions. He says that the regimen—one co-writing session in the morning, another in the afternoon—was something like a gym workout. “Whether those songs would ever end up on an album is irrelevant,” he says. “It was more a matter of getting the repetitions in, flexing that muscle.”

One and Only is a varied collection of songs; the title track features an arrangement that’s very much in the Nashville tradition, while other tunes lean more in a rock direction. McLean laughs when he’s asked if he’s trying to confound those who would try to pigeonhole him into one style of music. “When I sit down to write, I don’t consciously think, ‘I’m going to write a rock song now,’” he says. “These things just sort of present themselves.” He does allow that several of the new album’s songs are related in their subject matter. “There are a few new New Orleans-style funky numbers,” he says, “but there are a lot of, for a lack of a better word, love songs.”

“But I like having a couple different little things to keep interest,” McLean says with a chuckle. “Especially in the era of the short attention span.”