Todd Cecil: Have a Cigar 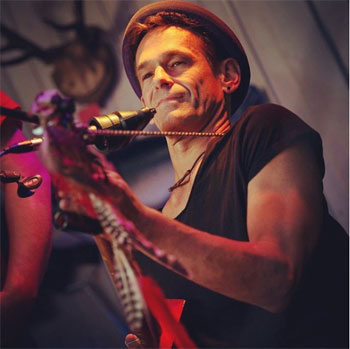 Cigar box guitars are very much in vogue now; it’s not at all unusual to see a nationally touring act take the stage with a hand-fashioned instrument featuring a body made from a wooden cigar box. But the instrument favored by Todd Cecil is quite a bit more exotic than most. “That’s the Lowebow,” he explains. “It’s made by John Lowe in Memphis.” The unusual creation has only four strings: one for bass notes and three that cover the range of a traditional guitar.

“It’s two broomsticks, a cigar box, and some magnets from Radio Shack,” says Cecil with a chuckle. “It might seem like it’s a really thrown-together instrument, but it sounds amazing!” Todd plays it with a bottleneck – a style favored by many guitarists from the early days of blues on through to present day – and says that switching from conventional guitar to cigar box has had a major impact on his music. “It forces you into the direction of writing that is not your normal style,” he says. “You’re forced into simplicity and complexity at the same time.”

Cecil’s style with his band Back South is a raw, amped-up take on traditional blues, infused with his own distinctive lyrical spin. Unlike some blues-based artists who develop a particular style – Chicago, Delta, etc. – Cecil draws upon a much wider assortment of influences. “I love Etta Baker, R.L. Burnside, Blind Willie Johnson and Mississippi John Hurt,” he says, but he also professes great admiration for gypsy jazz guitarist Django Reinhardt, old gospel hymns, and good old rock ‘n’ roll.

For many years, Todd Cecil lived in Nashville, Tennessee. “There was a flood in 2010,” he recalls. “And I pretty much lost everything I owned, including all my guitars, some I had had since I was a kid. I was wiped out.” He says the disaster sent him into a tailspin, so for a time he adopted a vagabond lifestyle. “I went to France for a little while; I kind of didn’t live anywhere, just bebopping around.” Eventually he landed in Western North Carolina, and discovered that unusual Lowebow. “I moved here, and then I ‘camped out’ for about six months, trying to figure how to play the freaking thing!”

The music that would come forth from Cecil and his Lowebow is a rootsy, swampy blues-rock. “If you play from your heart, everybody gets it,” he says. And he finds that to be true even when – as is the case when he tours throughout Europe – the audiences don’t always speak fluent English. And even at home in the U.S., Back South sometimes plays dates at events where music isn’t the primary focus. In those cases, Cecil and band mates Mike Fore (blues harp) and Scott Harte (drums) have to work harder. “You’re there for the audience,” Cecil observes. “I learned that from bluegrassers. I love the way they talk to the audience, let the audience in, let them enjoy it.”

Even though the Lowebow is an electric instrument – it plugs into two amplifiers: one for bass, another for guitar sounds – Cecil’s band remains acoustically-based. But Back South’s music makes audiences move. “When I put the Lowebow down – after an audience has been dancing and moving – if I pick up a banjo or something, the music kind of loses a little bit of its drive,” Cecil says. So when circumstances call for high-energy music, he sticks to his unusual guitar. The overall effect of Back South’s exuberant music bridges the perceived – and largely artificial – divide between rock, blues and Appalachian styles. And it’s not over-thought; the combination feels organic.

“A lot of times when you go see a band, you hear a few songs and then you’ve got what the whole show is about,” Cecil observes. “We try not to do that. We make our shows very versatile, so that if one song doesn’t resonate with the audience, we can throw things another way with the next song.” With Todd Cecil and Back South, “It’s definitely not like, ‘Okay, let me take some crazy north Mississippi music up to the mountains,” Cecil says. “All around Western North Carolina, it seems like there’s just a flowering of all kinds of styles. But then there’s that underlying Appalachian thing that I love.”