The oral tradition predates the written word by thousands of years. Throughout history, storytelling has provided both a creative outlet and a focus for community. The Appalachian narrative tradition has remained especially vibrant; to wit, the International Storytelling Center is based in nearby Jonesborough, Tenn. And in Asheville, gatherings and competitions in which people share their own personal stories have long been a popular draw. A relative newcomer to the local tradition, Moth Story Slams are part of a celebrated national network. The Asheville Moth GrandSLAM brought together ten winners of previous Story Slams for a competition held at the Diana Wortham Theatre, Oct. 29.

Dedicated to the art and craft of storytelling, the Moth is a non-profit organization founded in 1997. Moth competitions feature “true stories, told live onstage without notes,” says Sara Fields Bridges, producer and host of Asheville’s monthly Moth Story Slams. To date, the Moth has presented more than 35,000 stories; slams take place in 26 American cities plus others worldwide. Winning stories have the potential to be chosen for the Moth Podcast; Bridges says that the program is downloaded more than 52 million times a year. The broadcast version (Moth Radio Hour) won a 2010 Peabody Award for broadcast journalism and airs weekly on over 475 public radio stations worldwide. 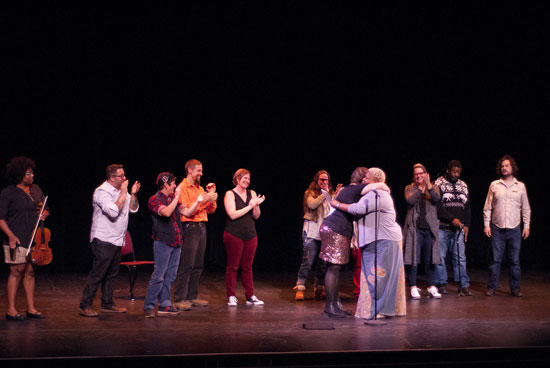 The Moth Story Slams got their local start three years ago. By that time, Bridges had already volunteered at Moth events in New York City; back home, she was immersed in Asheville’s storytelling scene. “I was drawing upon experiences with Tom Chalmers’ Listen to This show and Synergy Story Slams,” she says. She and Moth founder George Dawes Green often discussed the idea of bringing the Moth to Asheville. “And I always hoped that if that happened, I would be involved.”

In 2015, Bridges’ wish came true. “I got a call asking if I would like to be the producer, and of course I was over the moon for that opportunity,” Bridges says.

Held monthly at the Mothlight, the Moth Story Slams in Asheville would be an immediate sensation. “I don’t think that I ever could have imagined the success that our show has had,” Bridges says. “We have sold out every single show.” As one of very few Moth Story Slams in this part of the country, the Asheville event draws local tellers as well as competitors from throughout the region. The Asheville Moth Story Slams are the subject of an upcoming documentary film as well.

By design and character, the Moth experience is warm and welcoming. “When we get a brand new storyteller on our stage, somebody who has never performed in front of an audience, the reception and love for that person is just overwhelming,” Bridges says. “The audience gives them so much support; even if they stumble, there’s a big wave of applause and encouragement.”

Every Moth Story Slam features several storytellers, each presenting a talk based on a prompt provided in advance. A panel of judges selects the winning teller. And this year’s GrandSLAM (with the prompt “when worlds collide”) features ten finalists. But the competition won’t feature them replaying their greatest hits. “They’ve never told these stories before,” Bridges says, “So it not like something that’s rehearsed and in their back pocket.”

The winner of this year’s GrandSLAM* will earn acclaim. But even winning one of the monthly competitions is a big deal. Bridges notes that finalist Gary Sizer has now written two books; other tellers have had their work published as well. “Moth Story Slams can definitely be a jumping off point for people to further pursue their storytelling.”

The GrandSLAM competitors were familiar to anyone who has attended the monthly event at the Mothlight. One of them, Ray Christian, “is a bit of a Moth celebrity,” Bridges says. “When our shows were launched, he just kept winning and winning.” Christian has been featured on the Moth Mainstage Series and the podcast multiple times. He sums up his approach to telling a successful story with three guiding principles: “ Stay in the action, speak the words after you write them, and love your story.”

Moth stories are often inspiring and heart-rending. Finalist Cat Ashe* won a place in the GrandSLAM competition with her winning story about her five-month-old son’s death and home burial. “A good story needs to be told with passion,” Ashe says.

But stories can be – and often are – clever and humorous, too. Finalist Amy Jones earned her spot in the GrandSLAM competition with a tale of “a birthday dessert gone wrong,” she says. “It was tragic … and funny.” Jones says that for her, the key to telling a great story is writing one. Her advice: “Write it down, read it thoroughly and then speak it out loud in practice.” Beyond those tips, she emphasizes that “humor and tenderness is always a winning combination.”