Listen to This: The Zuider Zee Story (Part 2) 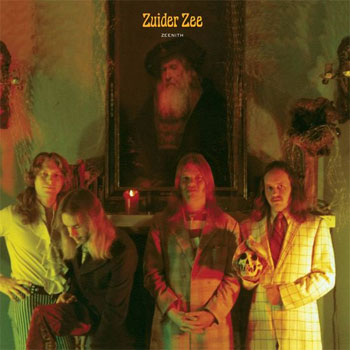 After the Shine’s Gone
Looking back some forty-plus years, Orange isn’t sure what plans –if any – CBS/Columbia had for his group. “I remember thinking, ‘Well, we’re with the largest record company in the business, so that’s got to mean something,’” he says. He does recall playing a gig at Alex Cooley’s Electric Ballroom in Atlanta, opening for Canterbury, England progressive group Caravan. After the show, he met label executive Terry Powell. Powell presented him with a pre-release copy of Wish You Were Here, by one of the label’s biggest acts: Pink Floyd. “Now I realize what it meant: ‘Welcome to the Machine.’ The irony was lost on me at first, but it wasn’t lost on me later on.”

Orange and Bertrand’s protestations aside, the Zuider Zee album on Columbia is a strong set of songs. And while the production sheen gives Orange’s songs a softer vibe than they might have otherwise had – think of Wings at the Speed of Sound or Pilot’s 1974 LP From the Album of the Same Name – the album isn’t completely done in by that approach. “The album got over-compressed; that’s why you have to turn it up louder,” Orange says. “I’ll leave the name alone whose fault it was.”

Orange and his band ended up disappointed with their experience with Columbia. “We expected so much and then we got so little,” he says, noting that after sending the band back to the studio to remix “Listen to the Words” for a single release, the label decided against releasing that – or any other single – from the Zuider Zee LP.

And the fallout from that decision reverberated in some troubling directions. “Certain criteria had to be met as far as getting airplay,” Orange says. “If you had a new release, you had to have a single, too.” He recalls the band doing radio interviews, only to be told afterward, “We won’t be playing this interview until we get the single.” Moreover, when the band visited record shops for in-store appearances, they found themselves in a situation right out of This is Spinal Tap. “We’d be assigned to go to the store to sign records,” he says, still incredulous at the memory, “and they wouldn’t have any!”

You’re Not Thinking
Orange reveals that despite the unhappy experience with the ill-fated Zuider Zee LP, plans soon got underway for a second album. He recalls the label execs asking him to compile a list of producers with whom he’d like to work; he suggested Queen producer Roy Thomas Baker and American pop wunderkind Todd Rundgren, and waited for a response from CBS.

The next news Orange received was that the label wanted to meet with the band again. So once again he sat down with Terry Powell, who told him, “We’re not going to do another album.”

“And then the strangest thing happened,” Orange recalls. Powell took him aside and asked if they could meet again the following morning – without the rest of the band. At that breakfast meeting, Orange says Powell told him, “The label really wants to go forward with you, but … not so much with the rest of the band.” Feeling a strong loyalty to his band mates, Orange turned down the offer.

Orange delivers a post-script to the tale: “Six months down the line, the band left me,” he says, “which is funny now. But not so funny then.”

Royal Command Performance
Another story – humorous then and now – concerns a gig that late-period Zuider Zee played not long before the group fell apart. In contrast to its opening slot for Caravan, on this night in January 1978, the band was scheduled to open for a band from England called the Sex Pistols.

“We were walking around before the soundcheck,” Orange recalls. “There was this guy with no shirt or shoes on; he had some cuts on him. And he had this low hanging pair of trousers that weren’t so tight on him because he didn’t have any body weight at all.” Making matters worse, this fellow was picking at a huge scab on his arm. Orange thought the guy was “a street urchin. I saw him and I thought, ‘Oh, God. That poor bastard. He’s in terrible shape.” He recalls thinking, “I hope they don’t call the cops on this guy, because they’ll beat him to the death. They’ll never find his body!”

When Zuider Zee finished the opening set, they cleared their gear off stage. “When it came time for the Sex Pistols to go on, I realized that the ‘street urchin’ was Sid Vicious!” As far as the Pistols’ performance, Orange – now an enthusiastic fan of punk acts including Fear, Black Flag, Dead Kennedys and the Clash – describes it as “anticlimactic. The sound was terrible.”

Better Than All the Others
For many years thereafter – until Gary Simon Bertrand found the tapes that would become Zeenith, the story of Zuider Zee was forgotten by most. And the path from discovery of those recordings to their 2018 release was a lengthy one. Bertrand had reconnected with the band’s former manager Russell, who revealed that he had tapes packed away in various storage facilities across the southeastern U.S. After some hunting, Bertrand found himself in possession of a number of two-track master reels. In 2013 he shared his discovery with archivist/journalist/musician Alec Palao, who would produce the 2018 release and write its enlightening liner note essay.

Because the unearthed Zeenith masters are two-track, there wasn’t any way to do any sort of revisionist remixing to make the tapes sound “current.” Arguably, that’s to the band’s advantage: the songs on Zeenith have a timeless quality just as they are. “As far as the writing and how the songs are constructed,” says Bertrand, “I don’t see that we would have done anything different, had we had the [multi-track] masters.”

The Breaks
Alec Palao remarks upon Zuider Zee’s place in pop history. “One should be careful not to compare them too much to Big Star,” he says, “because they were definitely coming from a different kind of place.” But he does recall his thoughts when he first heard Bertrand’s cassette dub: “Wow. This really pushes all my buttons. The Beatlesque thing. Sort of glam stuff. I love the idea of a band doing that kind of stuff in 1975 when everything is Marshall Tucker Band boogie.” While he finds the Zuider Zee back story fascinating, he’s unequivocal on one point. “The music is the thing that counts,” he says.

Today Bertrand still lives in Louisiana. While he’s not currently in a band, he still plays his drums at home. And he’s remained good friends with Orange. “I feel like we’re still neighbors,” he says. “Even though it’s long distance, Richard will often play me his new songs over the telephone. And it’s just as exciting to hear his new material today as it was 50 years ago when we first got together.”

After Zuider Zee, Richard Orange moved back and forth between the U.S. and Great Britain, and went on to form a band called Zee (not the duo of the same name featuring Pink Floyd’s Richard Wright). He was eventually signed to a publishing deal by Beatles’ publisher Dick James. Later, Orange spent time working as a house songwriter for a division of Motown. His “All the Way to China (Hole in My Heart)” was a worldwide hit in 1989 for Cyndi Lauper. Today he lives in Oklahoma. Bringing things back to his Memphis connection, Orange’s most recent solo album, 2005’s Big Orange Sun was recorded at Sun Studio.

Richard Orange remains justly quite proud of his 1970s work with Zuider Zee, yet he’s more than a little surprised at the current interest in his music from those days. “I’ve had to [think] back more than 40 years, for which I’m very grateful,” he says. “Better late than never, they say.”