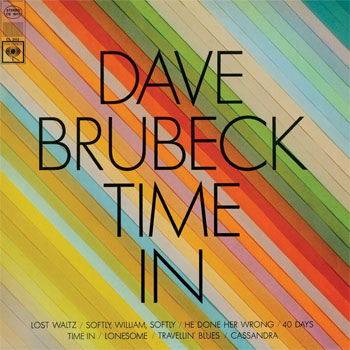 The opening solo piano strains of “Last Waltz,” the opening track on Dave Brubeck’s 1966 LP Time In are lovely enough. But they suggest that the album is going to be a somewhat staid, fussy and classically-leaning collection of songs. Certainly, there’s nothing wrong with that; Brubeck has always been a master of many styles.

Around the 40 second mark, Brubeck’s pace slows, then slows some more; the tune seems to be heading toward a premature end. Then – suddenly, and without warning – Brubeck executes a quick series of notes. In the same split second, the rhythm section joins in. What was initially a reserved recital is now a freewheeling jazz extravaganza.

The entire album doesn’t proceed in similar manner, but Brubeck and his sidemen do mix things up. “Softly, William, Softly” is just as its title suggests, with crystalline piano and Paul Desmond’s smoky alto sax. The title track employs dissonance and odd meter, with sections contrasting between melodic and angular.

The liner notes (reproduced intact on this stellar ORG Music vinyl reissue of the original album) tell us that “40 Days” is an excerpt from a larger, liturgical work. Oddly enough against that backdrop, the song has a smoldering, sexy vibe. “Travelin’ Blues” is a minimalist showcase of Brubeck’s deeply expressive piano work, with the band providing supple support.

“He Done Her Wrong” finds Brubeck and his group leaning into a strong soul jazz groove. The tambourine (way out front in the mix) may not have been wholly necessary, but the tune cooks. “Lonesome” is soothing and contemplative, yet a little showy and grandiose. The LP wraps with “Cassandra” a knotty and complex tune that switches seamlessly between meters. Gene Wright’s bass – an understated component of the album – is on quiet fire throughout.

Time In was the last in Brubeck’s “Time” series of albums. He would continue with Columbia Records for a few more years, and continued to use Desmond, Wright and drummer Joe Morello for most of his sessions. Not exactly rare in its original configuration, original stereo copies of the LP go for an average of $15, so this remastered reissue is most welcome.