Uncle Kurtis and Their “Killer” Album 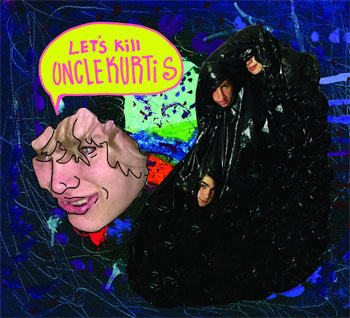 It’s not at all unusual for four 14-year-old boys to start a rock group. It is, however, remarkable when that band gets high-profile gigs in local bars, and cuts an album of songs, all within a year of forming. But thanks in part to parents drawing on their contacts, that’s what has happened for Uncle Kurtis, an Asheville quartet of rising ninth graders.

“Each of the dads for this group has some connections, and a lot of people are calling things in,” says Roger Darnell, father of vocalist Riley Darnell and enthusiastic spokesman for the band. He says that local club owners are “willing to accommodate us in special ways” by scheduling all-ages shows.

Bassist Quinn Sforza jokingly suggests another reason why his band lands sought-after bookings in a competitive local market full of worthy musical artists: “I don’t think they know that we’re all 14.”

The band’s studio album, Let’s Kill Uncle Kurtis, was released on Girth Records, an indie label run by the brother-in-law of one of Riley’s teachers at ArtSpace charter school. The group’s music reflects the influences of each member’s musical heroes. Sforza laughs when he mentions his influences: “Les Claypool, Jaco Pastorius, Flea … as stereotypical as it gets.” Guitarist Jackson Lee says his tastes run toward “avant garde composers, Kraftwerk and Tangerine Dream.” (Drummer Graham Barrineau was unable to make the interview.)

While the instrumentalists in the group cite the influence of ambitious artists, Riley draws inspiration from punk. “To get in the state of mind that I like to be in for shows, I watch Bad Brains videos,” he says.

Some of Uncle Kurtis’ songs feature knotty riffs, but many are built around one- or two-chord motifs; the group members agree that the approach is a sort of a band signature. The vocals consist mostly of Riley shouting seemingly off-the-cuff lyrics over the musical foundation. He says that he jots down lyric ideas on his phone. “And then, whenever they start playing a song that they want to turn into a real song, I’ll just pick one that I think fits the best,” he says.

Since getting together in July 2017 (some of the members had played together in other groups before their tenth birthdays), Uncle Kurtis has been booked at Soulshine and LEAF Downtown festivals, and Asheville venues Sly Grog, Isis Music Hall, Salvage Station and the Mothlight. Roger says his son’s group has a loyal following, one made up not just of kids.

There’s an unapologetically bratty demeanor to the ten songs on Let’s Kill Uncle Kurtis (four of which feature explicit lyrics). And the subject matter is sometimes intentionally provocative: “Back to Iowa” is a first-person victim account of a child kidnapping; the central character develops a Stockholm Syndrome-type attachment to his male abductor, and rebels when returned to his parents. Roger steps in to defend the band’s lyrics penned by his son. “The things that they like to sing about and carry on about make them all laugh together,” he explains.

The lyrics of the nearly six-minute, one-chord album closer “Rubber Man 35” concern a motivational speaker who appeared at ArtSpace. “His father told him not to have sex until he was 35,” Riley recalls with a laugh. “It’s based on a true story, like some of their other songs,” Roger interjects.

The violent nature of the album’s title might strike some as bad optics, especially at a time when many teens are protesting gun and other forms of violence (Uncle Kurtis played a concert fundraiser benefiting Everytown for Gun Safety and Moms Demand Action in May). Sophia Miller, designer of the album’s cover art, claims responsibility for the title.

But when pressed to explain its meaning, Miller just shrugs. When she drew the album cover art, she included a speech bubble above the floating head of drummer Barrineau. “There was some room above ‘Uncle Kurtis’ in the speech bubble,” she says. “So I wrote ‘Let’s Kill.’ And then that just became the album name.”

“It’s not really meant as anything,” insists Riley. “It doesn’t really matter. It just sounds good, I think.”

The lengthiest track on Let’s Kill Uncle Kurtis is the ambitiously-titled “Simfonia LaMousea,” a two-chord improvisation that runs more than 13 minutes. Its inclusion is explained in part by the band’s need to record enough music for a full-length album. “It wasn’t like we ran out of material,” explains Sforza, possibly joking. “We ran out of good material.” (The rest of the band responds with hisses and boos.)

Right now, the four band members are enjoying the summer before starting high school; their plans beyond that aren’t sharply defined. “We just want to make more songs,” says Riley. “Further develop them, and kind of round them off before we record them.”