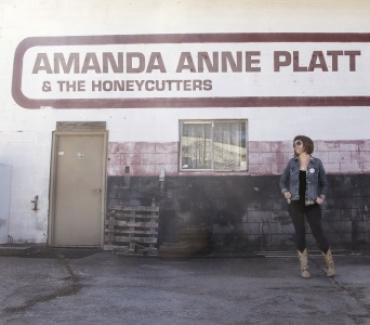 What led you to start billing yourself under your own name?

We’ve actually talked about doing it for every album that we’ve put out, starting with Irene in 2009. But because we had already been playing around town for a year or so under the name the Honeycutters, we figured if we just put it out as Amanda Anne Platt, people would be confused. But now that I’m in my 30s, I’m ready. It’s just simpler; that’s my name, I write the songs, and I sing them. And I’m the only original member of the group!

Does this suggest that in the future you’ll be working with other people who aren’t in the Honeycutters?

I have no current plans to switch up any of the people in my band; as far as I’m concerned, it’s just a little bit of a re-branding. And it does free me up a little bit to do more solo performances and not have people ask themselves, “Well, who the heck is Amanda Anne Platt, and why should I want to go see her?”

Some of the best albums are driven by a life-changing event: a breakup, a change in circumstances and so forth. Was there any kind of specific creative catalyst for this latest album?

Of course, there have been some pretty big national and global events of late, and I definitely feel some anger. But my reaction to that is to go inward, and focus more on my community, people around me and the smaller things that make us all human, instead of these really big political issues. So the new record feels “smaller” to me, because it’s more about the things that happen quietly every day instead of these big explosions that happen in your life.

When writing songs, to what degree do you draw from your own life as opposed to observing elsewhere?

A lot of my writing is inspired by stories that I hear about other people. Again, not big stories, but maybe a friend will tell me about something that his parents went through. I might get inspired by other people’s experiences and lives, but in order to write a song about that, I have to access whatever the emotion is, and tap into it myself. What I find most interesting about songwriting is getting inside those places that unite us.

Last year, the band was featured on NPR’s “World Cafe Sense of Place: Asheville.” Did that open any new doors for you?

Sure. But I think that with every little thing that we do, there are a few more people that hear us and like what we’re doing. And that might lead to some other venue we can play, or some new city we can go to, and a few more album sales. And that’s all good.