Fantastic Negrito: We Can Turn It Around (Part 1)

(An edited version of this feature appeared in print in Living Blues Magazine.)
All photos © Audrey Hermon Kopp 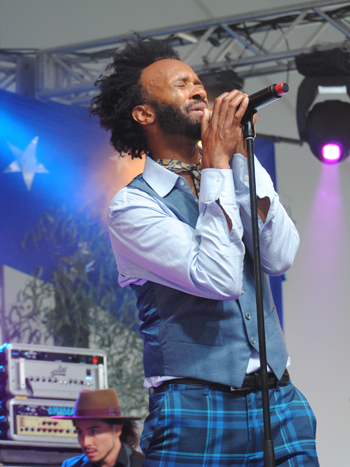 Fantastic Negrito is a a lot of things. On the surface, he’s a stage persona, the human means of delivery for songs that chronicle the realities of life. But dig deeper and you’ll find Xavier Dhphrepaulezz, a middle-aged African American who has experienced more than his share of starts and near-finishes. His past informs his present, and his indefatigable yet clear-eyed optimism points toward a direction for our shared, collective future.

Xavier Dhphrepaulezz was born in the Berkshires of Western Massachusetts, into a large family. “I was the eighth of fourteen kids,” he says. His father was an Orthodox Muslim of Somali heritage; his mother is from Brooklyn but has roots in Virginia. “An interesting mix,” Xavier chuckles. He recalls setting up a lemonade stand, for what would become his first taste of success. “I thought, ‘Oh my god! I know how to make money!’ That was a time I felt very independent.” The encouragement for the project came from Xavier’s father. “My Dad was an old guy; he had me at 63. He was from that generation of black men that taught, ‘Hey, do for yourself, man. Do not depend on these people and the system.’ He beat that into my head … literally.”

The family moved to Oakland in 1980, when Xavier was about 11. He immediately took to the Bay Area culture. “It was such a movement and such a vibration in the streets that I left, and didn’t come back home, and I never saw my dad again,” he says. Xavier was living on the streets when his father passed away. “It was an interesting life,” he admits. “That was my childhood: I grew up roughing it and toughing it, and loving arts in Oakland.” He fondly recalls the explosion of “music, art, dance, rebellion, all happening in the streets.” Punk and hip-hop were both thriving. 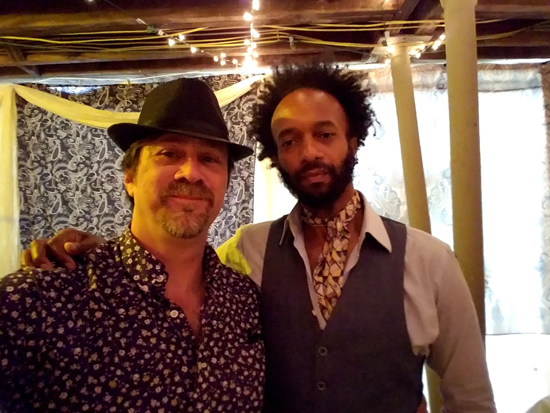 “There were so many new ideas swimming around out there,” he says. “It was a very stimulating place. But that mixes well with 12 year olds!” Xavier enjoyed music, but he didn’t play an instrument at that stage. “I never thought I’d be a musician,” he says. But as he was leaving high school, he decided that maybe he could. But he would need lessons of some kind. “I would fake my way into the University of California at Berkeley,” he recalls. “I would just pretend that I was a music student coming to practice; I would sit in the practice rooms and I’d just listen to what people were playing. They were playing scales. So I figured out that you could play a scale in every key on the piano, so that’s kind of what I practiced.”

He soon wrote his first song. “I was never gonna be a great player; I knew that. But I knew that I had ideas, and I had songs. And I wanted to paint pictures with those ideas.” He smiles and notes that it was only six years later that he inked a million-dollar record deal.

In 1996 Dhprepaulezz scored what looked at the time like his big break. He signed a record deal with hip major label Interscope Records, then home to Nine Inch Nails, Marilyn Manson and Tupac Shakur. But his experience with the majors was an unhappy one. “It was not a very good marriage,” Xavier says. On one side there was him, “an artist, a kid from the streets in the Bay Area with one vision and idea,” and on the other was what he describes as “the giant, corporate machine that has another idea.” He doesn’t place blame, readily conceding that “it’s subjective as to which one is ‘good’ or ‘bad.’ I have no bad feelings about any of that stuff. If you survive it, you become much more powerful. I’m a stronger human being. And things happen; this is life.”

Xavier produced a video for “Saturday Song,” a standout track from that 1996 album, The X Factor. Compared to his recent music, the performance is mannered, with a hint of forced earnestness and more than a passing similarity to the work of Prince. Looking back through all he’s experienced since then, he says that the artist who made “Saturday Song” is “a different person, for sure. You look back at what you did and what you said and what you felt 20 years ago, and it’s different.” But it’s more than that. “It was such a narcissistic era,” he says. “’Me! Me! Me!’ And I didn’t know how to let people in. I think I’ve learned how to do that now.” None of his old 1990s material shows up in a Fantastic Negrito set list. “Not at all,” he says. “I don’t really go backward. I try to go forward.” 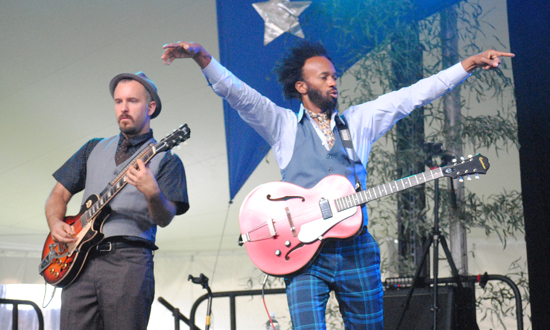 Xavier thinks of his Interscope era as Phase One. Phase Two was losing it all in an accident. He says that at that time he was living the L.A. lifestyle, picking up women and partying. One night he was driving with a female passenger – he doesn’t know her name – when his car was struck by another vehicle. Xavier was badly injured, almost killed. “I spent three weeks in a coma,” he says. Among other serious injuries, his right hand was crushed.

He recalls that during that time, he experienced bizarre dreams. He recalls one: “I was born out a goat; that was interesting. I don’t know if that was [an effect of] all the drugs they were pumping me up with.”

When Xavier awoke, the doctor asked him what he did for a living. When Xavier responded that he was a musician, the doctor told him that he’d have to find a new career. “Initially, my heart sank,” Xavier says. “But then I reached inside and said, ‘That’s not me.’ I’ve never been a quitter. So I just started walking the walk.” He says that even at his lowest points, he’s always been an optimist.

His Interscope deal terminated, Xavier returned to a life on the street after his accident. In the years that followed – after gaining some limited use of his “playing hand” – he made new music using other identities including Blood Sugar X, Chocolate Butterfly and a collaborative project with Masa Kohama called Me and this Japanese Guy. “I discovered film licensing, and that really gave me some financial independence,” he says.

Xavier would eventually launch Phase Three. This time, when he reactivated his musical efforts, he unveiled a new persona: Fantastic Negrito.