When Diali Cissokho moved to North Carolina in 2010, he knew hardly anyone. The Senegalese musician didn’t speak English, and had no one with whom to play music. But with the help of his wife and mother-in-law, he put together a dance band, Kaira Ba. Eight years later, Cissokho has a strong command of the English language, and has just released his third album, Routes.

Soon after Cissokho first settled in Pittsboro, N.C., he says he found himself sad and bored. “I have to play music,” he told his wife. “I cannot move to U.S. and try to find another job; I’m not good at that. That doesn’t make me happy.” His wife Hilary Stewart—a Pittsboro native—was supportive. “She’s very strong, and she pushed me,” Cissokho recalls. “She said, ‘Yes, you’re going to find a band.” 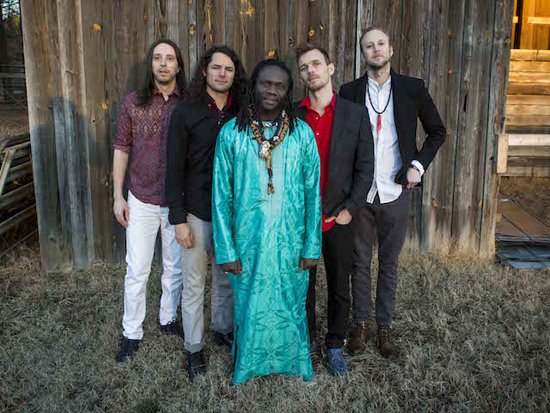 In fact it was Stewart who found the musicians who would make up Kaira Ba. “I didn’t build this band,” Cissokho says. “My wife and her mom, they built this band.” Stewart invited a lifelong friend, Berklee-trained guitarist John Westmoreland, to come over. “We hung out, and started playing” Cissokho says. “Me and John, we started getting along, and that was the beginning of Kaira Ba.

“My wife and my wife’s mom, they always tried to find right musicians for me,” Cissokho says. “Because they know my talent and they know I’m kind of difficult to guide. I don’t want just a musician who will not play with their heart, because the music I’m doing, you have to have a big heart. You have to be positive with music; then I can take you. And they were looking for that kind of person.”

They soon found the right people. Cissokho sings and plays the kora, a 21-string West African instrument that looks like a cross between a lute, a harp and a banjo. Today Cissokho is backed by Kaira Ba, a group that includes Westmoreland plus three more North Carolina-based musicians: bassist Jonathan Henderson, drummer Austin McCall and percussionist Will Ridenhour.

Cissokho’s music is steeped in Senegalese traditions; the music he makes with Kaira Ba combines those flavors with Western instrumentation and musical sensibilities. But he admits that it didn’t start out that way. “When I started playing with John, he always followed my direction; he always tried to play African style,” Cissokho says. “But [once] he was comfortable, I said, ‘John, you know what? Now it’s time for me to join your style of music, to move out to be comfortable with a new style.’ So we started sharing.”

The band released its debut, Resonance, in 2012. That recording subtly applies a rock aesthetic to West African griot musical traditions, but the Senegalese flavor of Cissokho’s music isn’t diluted in the process. The Great Peace followed in 2014; Routes was released June 29 on Twelve Eight Records, a label founded by ethnomusicologist Henderson, who also co-produced the album.

For Cissokho, the act of making music is deeply ingrained into who he is. “We don’t just play music,” he says. “We speak. When we’re on the stage, we speak by our hearts, and the audience understands what we say.” Though his lyrics—showcasing the Senegalese Manding and Wolof cultures— are indecipherable to most Westerners, somehow the ideas and emotions get through.

A variety of guest musicians from both Senegal and the U.S. (including North Carolina “chamber soul” vocalist Shana Tucker) lend their talents to the album. A booklet included with Routes features liner notes that explain and contextualize each of the album’s 11 songs, and printed English translations express the depth of Cissokho’s lyrics about family, death, friendships, love and Ndoli, a mythical creature in Mandinka folklore.

The international feel of the album also draws from Malian traditions (the instrumental parts of “Story Song”) and Latin culture (Salsa Xalel”). The latter is “just something I decided to combine,” Cissokho says with a laugh. “it’s a little bit Senegalese.”

Written in the aftermath of being harassed by drunken concertgoers at the Shakori Hills Festival, “Baayi Leen” is a reminder that “judging people without knowing their story is wrong,” Cissokho says.

The musician relates a story that gives him great satisfaction. “We were in a performance, two or three years ago. When we were done playing, a lady asked me, ‘Do you realize what kind of music you do? Your music is like a medicine. I was having a bad day, a sad day. And I don’t understand what you’re singing, to be honest. But I feel you, and it’s a medicine for my heart. You have something that’s magic.’”

“That’s the kind of music we do,” Cissokho says. “At first, people don’t always get it. But one day they’re going to get it.”