A Chat with Amythyst Kiah

Raised in Bristol, Tennessee, a town sometimes described as the birthplace of country, Amythyst Kiah grew up immersed in music. Kiah released an album, Dig, in 2013, and the EP Amythyst Kiah and Her Chest of Glass last fall. New albums – one from her group, another a solo acoustic set – are in the works, and Kiah is poised to break out in a big way.

You recently opened for Americana superstar Rhiannon Giddens on several concert dates; how did that come about?
I met Rhiannon and [her group] Carolina Chocolate Drops a couple of times over the past five or six years. In January I got an email from her manager: “We’ve been following Amhthyst Kiah, and we’re really impressed with what she has been doing so far.” They wanted to know if I wanted to join the tour! It was a pretty cool opportunity. 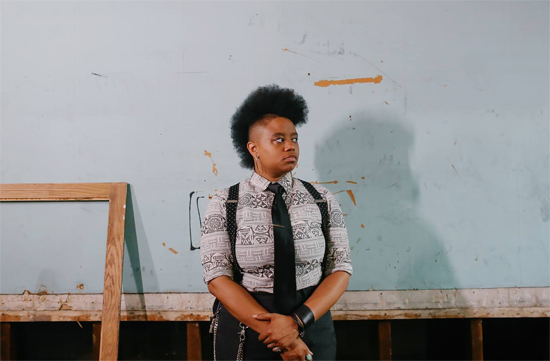 How does music figure into your family background?
My mom and dad both are big music fans; there was always music playing in the house. Family goals were set for me to developing into a well-rounded individual: play some kind of sport, keep the grades up, and get involved musically in some way. I ended up getting a guitar when I was 13. But most of my first 10 years of playing guitar and singing happened in my room; I was able to create my own little world.

How did you go from playing and singing in your bedroom to performing onstage?
I decided to enroll in a guitar class at East Tennessee State University. Over the next six to seven years, I ended up performing in school bands, playing traditional music and learning about the history of the music. I discovered how multicultural southern music is. In that program, the focus was not only on history, but also about performing and stage presence. Because it was challenging to go from playing in my room to, “now you’re on the stage, and people are watching.”

Your rootsy, original songs have elements of country, blues, and even gospel. Those are all indigenous American styles. What is it about traditional music that appeals to you?
When I started listening, I heard a lot of similarities between contemporary music and a lot of the old time songs. There was one song in particular that really struck me. “The Blackest Crow” is about a couple, one of whom is out at sea. Anything could happen; you really don’t know if you’re going to see them again. Songs about questioning – examining loss and death, working through those emotions and trying to come out on the other side – have always resonated with me.

How important is your African American identity to the music you make?
I tell people, “Hey, this may be your first time seeing this, but black Americans playing this kind of music is nothing new.” But if I can get one person to open their mind and explore something that could really be more fulfilling for them, I feel like I’ve done something pretty good.