Hawaiian ukulele sensation Jake Shimabukuro catapulted to international fame in 2006 when a Youtube video of him performing the George Harrison-penned Beatles tune “While My Guitar Gently Weeps” went viral. By that time, Shimabukuro was already well-known in his native Hawaii and in Japan; by 2006 he had released six albums in the west plus one made specifically for the Japanese market.

Since then, Shimabukuro has toured widely and released many more solo albums (13 to date in the U.S., and ten Japan-only releases). His 14th American release, The Greatest Day, was released August 31. 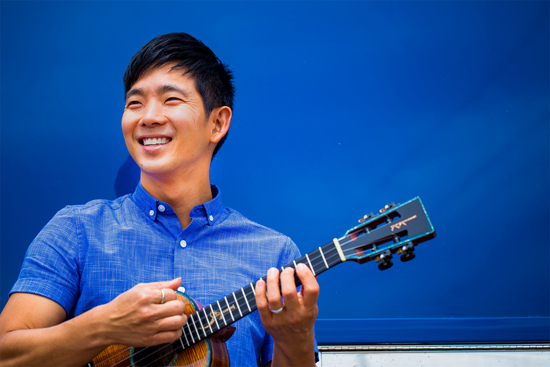 While The Greatest Day will find Shimabukuro returning to his signature style of highly melodic, pop-leaning yet virtuosic ukulele playing, his restlessly creative nature has led him in some interesting musical directions. For 2016’s The Nashville Sessions he continued his exploration with amplification and looping effects (begun on 2012’s Alan Parsons-produced Grand Ukulele), and fronting a power trio. The results sometimes sound a bit like Eric Clapton playing with Cream.

“Sometimes things work, and sometimes they don’t,” says Shimabukuro. “There are things that I’ve recorded that at the time I thought were kind of cool, but now when I go back and listen, I’m like, ‘What was I thinking?’” While The Nashville Sessions earned roundly positive critical response, fans of Shimabukuro’s acoustic work were left a bit confused.

“There are always people who tell me, ‘I just love when you play solo with just the natural-sounding ukulele,’” he says. “But there are people who like the fuller sound with the bass and the drums. I love both.”

Happily, thanks both to his versatility and his large body of work, onstage Shimabukuro can exercise his creative muse in a number of ways. “In a live show you can cover a lot of ground,” he says. “In our live shows, even though I have a trio with me, there’s still a section in the show where I just sit there and play a solo arrangement.”

Shimabukuro says he thrives on variety and challenges. “I’d get bored if I were doing the same thing night after night,” he says. These days when a melodic idea strikes him—“I could be walking around the mall,” he says—he captures it on his smartphone. Gone are the days when he carries his uke with him everywhere he goes. “I used to,” he admits. “Until I had kids, that thing was always at my side.”