Jordan Okrend’s Light in the Dark 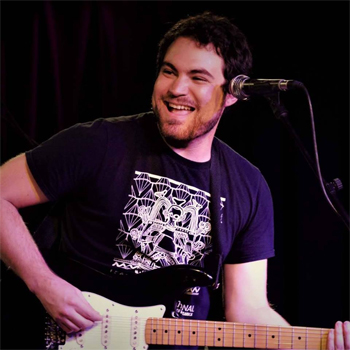 Jordan Okrend manages to have it both ways. He’s a pop artist, but one who incorporates more ambitious forms into his original music without sacrificing a strong melody. The Berklee College of Music graduate recently released his third disc Dance by the Riverside, recorded at Sound Temple Studios in Asheville.

In your music, how do you reconcile the two different approaches to music: the studied, scholarly approach of Berklee, and the unschooled “feel” approach that’s more associated with rock, soul, and R&B?

In my mind, they come together. All that practice and theory is unconscious when I’m writing. I think more about a cool groove and melody rather than that technical stuff. When I write music, it’s all about what I hear and feel, all from an intuitive standpoint.

You moved recently; what brought you from New York City to Western North Carolina?

Part of it was family; my folks live in Black Mountain. But I grew up in North Carolina. And the music scene here is really kicking off; it’s really vibrant. People are really down to Earth, and there’s a greater spirit of a town. Also, I love hiking, I love nature. You get a lot of that around here, which you don’t have in New York City.

You took part in a 2016 Brown Bag Songwriting Competition at Asheville Music Hall. How did that go?

I made it to the final round, and won second place. That event got my name out a little more. And to have that on my résumé – especially with me being new to the area – certainly helps.

Some of the chords in songs like “Infinity” on Dance by the Riverside remind me a bit of vintage Steely Dan; though they were nominally a rock band, jazz informed their music. Is the same true of you?

Yes. I do try to subtly interject jazz fusion into my pop songwriting. I’ll just add little voicings within songs to give a jazz edge, and use saxophone in my full band performances.

There’s a strong social consciousness that runs through your lyrics, but it’s not at all preachy. What kind of themes do you try to convey in your music?

A lot of my music is based on personal empowerment and hope. I write a lot about things like seeing the light in the dark, achieving your full potential and becoming greater than what you are now, getting out of a tough spot. I just like to be positive and try to uplift people; I think that’s what people need to hear, especially today.

Your song “Unity” is especially timely right now. Are the lyrics related to the last presidential election?

Yeah; I often write about social things, my interpretation of what I’m seeing. “Unity” is my take on seeing people fighting on Facebook. It’s about people coming together in the face of all these socially divisive things that are pushed on us every day. We’re all human, and we should all try to be friends.