Home  »  reggae   »   Toots & the Maytals: Rocking Steady for More Than a Half Century

Toots & the Maytals: Rocking Steady for More Than a Half Century

Ask a casual music fan to name a reggae artist, and you’re likely to hear the name Bob Marley. And while it’s true that Marley and his group the Wailers were making ska and rocksteady music—two Jamaican styles that predate reggae—as early as 1963, it was the Maytals who first used the term reggae, and can thus lay legitimate claim to being the “first” reggae group.

Led by singer, guitarist and songwriter Frederick “Toots” Hibbert, the Maytals (or Toots & the Maytals, as they would soon become known) released the single “Do the Reggay” in 1968. A hit in Jamaica, that single helped reggae’s popularity begin to spread beyond the Caribbean island nation. In 1969 the group scored more Jamaican hits with the singles “54-46 (That’s My Number),” “Pressure Drop” and “Sweet and Dandy.” 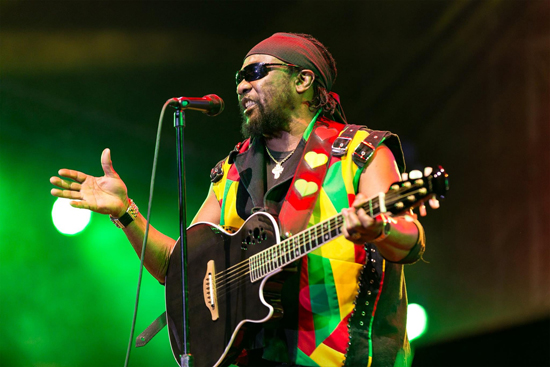 In 1970 Toots & the Maytals broke out internationally with “Monkey Man.” That and the three previously-mentioned singles were included on the group’s now-classic 1969 LP Sweet and Dandy, reissued in the U.S. (in modified form) in 1972 as Monkey Man. Two Maytals songs were featured on the soundtrack of the influential 1972 film The Harder They Come, and a deal with Chris Blackwell’s Island Records helped make Funky Kingston (1973) and 1975’s Reggae Got Soul international hits. The Who asked Toots & the Maytals to be their opening act on the British group’s 1975-74 tour of North America, helping to further expand the Jamaican group’s audience.

In the new wave era of the late 1970s and early ‘80s, renewed interest in ska led to revived popularity of some of the Maytals’ earlier, pre-reggae recordings. Both the Specials and the Clash covered songs from the Maytals’ reggae years.

Toots & the Maytals split in 1981 after the release of their Knockout LP, but Hibbert reformed the group with a new lineup a decade later. The band played two high-profile, well-received sets at the 2017 Coachella Festival; later that year the group headlined the world-music WOMAD Festival; the festival launched by Peter Gabriel was celebrating its 35 year anniversary.

Toots & the Maytals have released more than 30 albums—studio, live and compilation—and in late June the group was once again in the studio, working on a follow-up to 2012’s Reggae Got Soul: Unplugged on Strawberry Hill.