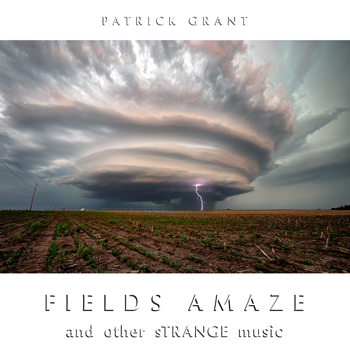 Anything that crosses my desk and making mention of Philip Glass warrants a closer link. But the placid soundscapes of Glass’ work aren’t at all what you’ll find within Fields Amaze. This is a remixed, remastered, re-whatever of Patrick Grant’s 1998 work. Created for percussion and tuned instruments, it’s a varied collection of instrumentals that – to my ears, anyway – owes more to Steve Reich and/or Edgard Varèse. It also (at least some of the time) sounds a bit like a more conventionally tuneful answer to Frank Zappa’s Jazz From Hell, though this work is realized on “real” instruments, not the cold, foreboding Synclavier.

There’s a hypnotic feel to the piano melody underpinning to the title track, played on gamelan and microtonal keyboard. “A Visible Track of Turbulence” feels like soundtrack music; in fact that’s a characteristic of all the music here. The aptly-titled, two-part “Imaginary Horror Film” arrives in reissue form just in time for Halloween. “The Weights of Numbers” is delightfully prog in its execution, and it’s even a bit playful. Each tune has something artsy about it, and the liner notes and flowchart(!) help the listener understand and appreciate exactly what that is in each case. Breaking from the instrumental theme, the final track, “If One Should Happen to Fall” is described by the artist as “singer vs. thesaurus.” He’s clearly got a sense of humor. In places, the tune sounds a bit like — here’s another Zappa reference – Missing Persons. But ultimately it’s too ambitious for that. By pop standards, it’s all pretty avant garde, but – more significantly – by avant garde standards, Fields Amaze is quite pop-leaning in its intent.