After a couple albums’ worth of searching for his signature style, Nebraska-born Matthew Sweet struck creative and commercial gold with his 1991 album Girlfriend. Sweet’s winning voice and thoughtful lyrics were joined not only by his enduring melodic sense – the man has a knowing way with a sharp melodic hook – but by some tasty, jagged and highly inventive lead guitar work, courtesy former Television axeman Richard Lloyd.

Though Sweet shouldn’t be considered a formulaic artist – his body of work is too varied to be diminished by that description – he learned all the right lessons from the success of Girlfriend. He followed that album up with a string of chiming pop-with-teeth releases; that creative winning streak has now endured nearly two decades, across ten subsequent solo albums. Released May 18, Tomorrow’s Daughter is Sweet’s latest; it’s a sort of companion piece to 2017’s Tomorrow Forever.

And while Lloyd hasn’t been involved in Sweet’s recent projects or concert tours, his approach to playing – virtuosic, gonzo guitar lines of the sort one rarely finds within the power pop idiom – remains a prominent feature of Sweet’s work. Of late, guitarists including John Moremen (The Paul & John, The Orange Peels, Flotation Device) and Jason Victor (Dream Syndicate) have been among his six-string foils onstage and/or on recordings. 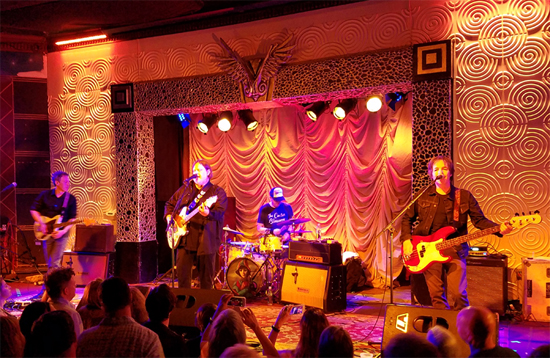 Sweet’s current run of dates in support of Tomorrow’s Daughter included a May 25 date at Charlotte, N.C.’s Visulite Theatre. After a brief but effective opening set from local band  (their new release was produced by pop legend Mitch Easter, who was in the audience this night), Sweet and his band took the stage. His longtime rhythm section returned for this tour: bassist Paul Chastain and drummer Ric Menck (both of Velvet Crush) helped deliver Sweet’s songs in superb fashion. For a handful of dates including the Charlotte show, Victor was in charge of spinning out the dizzying lead guitar parts; this he did in dazzling fashion, from start to finish.

Victor did a fine job of splitting the difference between replicating the studio leads (many originally cut by Lloyd) and expressing his individuality as a precise, expressive and original instrumentalist. Meanwhile, at center stage, Sweet ran the band through a set heavy on classics (“I’ve Been Waiting,” “We’re the Same,” “Sick of Myself” and a dozen others), mixing in a few inevitably lesser-known tracks from his latest release.

The new material didn’t sound out of place among the well-known songs; that’s a testament to the consistent quality and distinctive yet identifiable nature of Matthew Sweet’s songs. Some pre-show difficulty with his standard amp rig (solved by instrument tech and Spongetones bassist Steve Stoeckel) seemed to throw Sweet ever-so-slightly off his game; after every song – and without exception – he turned his back to the audience to either fiddle with his amp or draw a pull from a water bottle.

Under normal circumstances, that repeated turning away might have diminished the flow of a concert; oddly, in Sweet’s case, it instead created its own kind of rhythm and pace for the show. Matthew Sweet and his band were in fine form this night, and the rapturous applause from the audience was in enthusiastic recognition of that fact. After a two-song encore, Menck and Victor returned to the stage, apparently expecting Chastain and Sweet to follow. But a house sound tech (not Stoeckel) quickly appeared onstage and admonished the musicians that no, in fact, their show was over.

That said, the audience in the nearly full house at the Visulite Theatre certainly got its money’s worth, singing along to “I’ve Been Waiting” and the long list of other Matthew Sweet classics performed this night.

Postscript: I saw Sweet and his band again in Asheville in August 2018. They were even better.