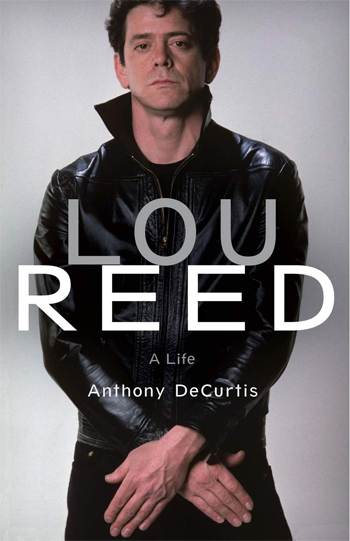 There have been a number of books written about Lou Reed and/or the Velvet Underground. Victor Bockris’ Transformer: The Lou Reed story hit shelves nearly a quarter century ago, at a time when Reed’s creative renaissance hadn’t yet fully flowered. And although Bockris recent published an updated version of his bio, unless he rewrote the whole damn thing, I think I’ll pass.

Part of the reason for my lack of interest on that score is the appearance of Anthony DeCurtis’ Lou Reed: A Life. DeCurtis is a highly respected music journalist. Yes, he’s also a serious fan of his subject, but the Rolling Stone contributing editor takes an evenhanded, admirably nonjudgmental look at Reed’s life and work.

That life and its body of work are inextricably entwined, as is so often the case with great artists. It’s difficult — and often not altogether useful — to try to separate the two; one can’t hope to understand one without some knowledge of the other. And DeCurtis provides plenty of both. Readers with only a surface knowledge of Lou Reed, the Velvet Underground and the associated music will learn a great deal. They may well not come away liking the man; that’s value judgment. But readers will discover context that helps increase the understanding Reed’s early work, the music he made with the VU, and solo albums like Metal Machine Music and The Blue Mask.

Reed’s notoriously difficult nature is on display from the book’s beginning until (very nearly) its conclusion; DeCurtis doesn’t pull punches or make excuses for his subject. Instead he presents the story — certainly not dispassionately, not exactly objectively — but in a manner that’s suitably respectful of its subject while maintaining journalistic ethics.

Hardcore Reed fans will find much that reinforces already-held notions of the man, but DeCurtis’ book will add nuance to those viewpoints. And with Lou Reed: A Life, Reed neophytes have as close to a definitive biography of the man — and an eminently readable one at that — as could ever be hoped for. In the end, it’s essential reading for both camps. It is, of course, completely impossible to know if Reed would have approved of DeCurtis’ book. Odds are he would not have; such was his nature. But one suspects that he would have had a kind of grudging, silent admiration for it.