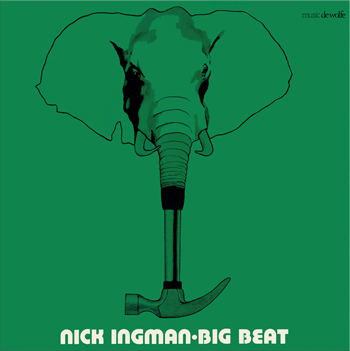 Cratediggers and/or musical Anglophiles of a certain stripe will recognize the name DeWolfe Music. Established over a century ago, the British music production company carved out a unique and important niche in the music business, creating what is today known as library music. No, not something you’d listen to in your local library, but sort of the musical corollary of Getty Archive’s photography/image library. Put simply, DeWolfe oversaw the creation (and licensing) of music for films in an era when producers didn’t always specifically commission made-to-order music for their films.

In the context of rock, the most well-known DeWolfe catalog items (and the expression “well known” is, frankly, grading on a curve) would be the series of recordings credited to a group calling itself the Electric Banana. Of course that was a pseudonym; the actual players, songwriters and vocalists who went by the nom de cine were, in fact, the Pretty Things. Their music created for DeWolfe represented a sideline that (one hopes) helped to pay the bills.

Those Electric Banana sides have seen some modern-day release, mostly in the form of pirated or extremely-limited-run releases; one hopes that in the future a domestic label such as Sundazed/Modern Harmonic might curate a release of those recordings.

In fact there’s a glimmer of hope that such a thing might someday happen. That hope comes in the form of what may well be the first in a current-day reissue of DeWolfe library material. (It’s certainly the first to come to my attention.) Big Beat is a collection of a dozen instrumental, designed by its creator (one Nick Ingman, who has also worked with Oasis and Madonna!) to serve as incidental music for your next film.

If, that is, your next film happens to be coming out in the late ‘60s and early 1970s. And if said film seeks to capture the streetwise grit of films like 1971’s Shaft! (with music by Isaac Hayes), Bullitt (the 1968 flick scored by Lalo Schifrin) and other crime/actioner classics of the era.

As the current-day liner notes of this new 2018 vinyl release from Modern Harmonic emphasize, “the beats are, indeed, very big.”

The track titles are expressly designed to telegraph the vibe, and the original DeWolfe release (as well as the new reissue) helpfully includes very brief details that give more flavor. An example: “’Trip Wire’ (dramatic pulsing beat).’” Another, and my favorite description: “’Throng’ (relaxed, pacy).” No word on exactly what pacy is, but it probably refers to the enduring groove laid down in the cut.

Big Beat makes for fun listening, but it likely has purposes well beyond leisure/aesthetic activity. I’d be shocked if somewhere this very minute an enterprising beat maker isn’t deconstructing the dozen cuts from this LP for use in his or her next hip-hop production.