David LaMotte: So Much to Do, So Little Time

For many Asheville-based musicians, making music is just one of the things they do. Cobbling together a financially sustainable lifestyle means taking on one or more part-time “side hustles.” In a sense, that’s what singer-songwriter David LaMotte does. But the nature of his involvement in myriad pursuits takes the form of multiple full-time gigs. Somehow he makes it all work, and there are new albums—his 13th and 14th—on the way.

LaMotte’s website identifies him as “musician, speaker, author.” But a look at his activities of late might lead one to suspect he’s not dividing his energies equally among those three areas. “I can’t claim to find balance very often,” he admits. Grateful to have found work that’s meaningful for him, he nonetheless feels pulled in several directions. “There is so much to do that feels like it matters,” he says. “And I say ‘yes’ more often than I should. That’s not healthy or sustainable, but we are living in an intense time, and there’s a lot to do.” 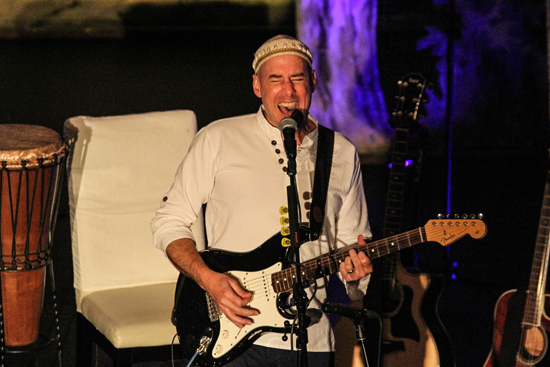 And he does a lot. “Speaking and workshops are definitely taking a lot of my time and energy these days,” LaMotte says. His 2017 TEDx Asheville talk, “Music Can Help Us Understand Peace and Conflict” further boosted demand for LaMotte as a speaker. “I really value that work,” he says. “So it’s hard to figure out where to cut back.”

LaMotte’s multiple pursuits also include serving as president of the nonprofit PEG Partners, an organization founded by him and wife Deanna to support “literacy, critical thought, and artistic expression in Guatemala.” Meanwhile, his most recent album, The Other Way Around, was released almost two years ago. So it’s fair to wonder if he’s set aside his musical career. “I was at an event recently where we were supposed to shout out a sentence together, and there was a blank to fill in with our vocations,” he recalls. And I just stood there baffled.”

But he still identifies as a musician. “I’ve had a chance to be a full-time musician for 27 years,” LaMotte says. “That’s taken a lot of different forms, but it’s still the heart of how I see my work.”

For his upcoming (and as yet untitled) albums, LaMotte has repeated some of what’s worked for him in the past; in other ways, he’s exploring uncharted territory. The connection with the past comes in the form of a crowd funding campaign for the album. Following on from the success of a Kickstarter campaign to fund The Other Way Around, he launched a new campaign for the records—one live, one a studio project, both produced by Chris Rosser—due out in October 2018 and May 2019.

The crowd funding effort was another success. “It was a heavy lift and a big goal, but folks really came through to support it,” LaMotte says. The campaign raised 108% of its $45,000 target. “Crowd funding invites the community to directly support creating the art, and I love that invitation and participation,” he says. “People take ownership of the project, because they really do own it.”

On his earlier albums, LaMotte has often drawn upon the talents of friends and musical associates. But for the new studio album, he’s taking things a step further. “This is going to be my first true band album,” he says. “This will be the first time several people are making the decisions together.”

The group—featuring LaMotte plus Billy Jonas and Dawud Wharnsby—is Abraham Jam, and LaMotte’s description of it reads like the opening of a joke: “A Jew, a Muslim, and a Christian start a band…” The group’s diverse character will provide the studio album’s theme.

“It’s a pretty counter-intuitive message for the time we’re living in,” LaMotte admits. “The point we’re trying to get across—aside from the intrinsic value of the music—is that we don’t have to agree about everything in order to be in relationship that is beautiful and rich.”

LaMotte makes a subtle but important distinction about that message. “We like to frame it as ‘harmony is even better than unity.’ Given the horrific headlines these days, it’s important that folks with platforms find a way to tell better stories,” he says. “We all need a little hope.”

Meanwhile, LaMotte remains busy with writing, speaking, nonprofit work … and this month’s local performance. “I really haven’t done a solo show in Asheville in a very long time,” he says. “So it will be fun.” Even though he has his hand in many different pursuits, live performance remains among LaMotte’s most treasured experiences. “It really is a cooperative effort,” he says. “The power of songs happens in the space between the artist and the listener.