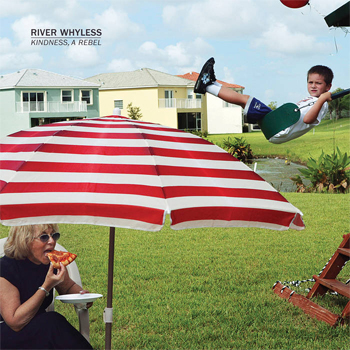 On the group’s 2016 album We All the Light, Asheville-based group River Whyless pushed the boundaries of indie folk, its supposed genre. In doing so, the quartet could serve as Exhibit A for the relative meaningless of genre labels: to be sure, what River Whyless does draw from Americana and folk, but neither of those terms scratches the surface of the band’s sound and musical approach.

Listening to the band’s latest release, Kindness, A Rebel, it’s even more difficult to make the case that River Whyless is any one thing musically. Or any two, for that matter. The album opens with “All of My Friends,” a song that evokes thoughts of both Stevie Nicks (in its commercial feel) and the Roches (in its understated yet ambitious use of folk textures to create something bigger).

And while there remain plenty of acoustic-based sonic elements on Kindness, A Rebel, those now comfortably coexist with more modern textures. Nowhere is this new approach more on display than in the album’s standout single, “Born in the Right Country.” Stuttering electronic percussion and ever-so-slightly distorted electric guitars are used in the most nuanced way, in service of a moving song that addresses social inequality. (The associated music video is a masterwork as well, expanding on the song’s theme in deft ways.)

“Motel 6” has a cavernous vibe, with elements of both high-lonesome western country and the grand arrangements of Phil Spector associate Jack Nitzsche. River Whyless’ close vocal harmonies echo Fleet Foxes’ approach, but with a less precious, less mannered (and thus more emotionally resonant) feel. And again, the group’s lyrics are contemplative, addressing ideas that are personal and universal at once.

“Van Dyke Brown” is another skillful reconciliation of the tension between acoustic and electronic music-making methods; the song has an ambience that strongly recalls Graceland-era Paul Simon. And the group leverages its impressive vocal strength on the fetching and hypnotic “Failing Farm.”

Social issues are never far from the collective minds of River Whyless, but they’re addressed in a way that isn’t preachy; instead, the lyrics of many of the songs on Kindness, A Rebel pose useful questions, implicitly encouraging the listener to examine her or his own thoughts on the subjects. And on cuts like “New Beliefs,” they sound more than a bit like Crosby, Stills Nash & Young while they’re doing it.

The band is gleefully unafraid to explore new musical territory. An exuberant “whoo!” joins an insistent electric bass that introduces “The Feeling of Freedom,” a song rooted as much in speed punk as it is in more, er, rootsier forms.

That wonderfully reckless approach is applied to River Whyless’ lyrics on “Another Shitty Party,” a track that weds shimmering vocal harmony, subtle synthesizer patches and a stinging electric guitar solo to what sounds like Laurel Canyon folk rock.

Yet the album’s adventurousness is balanced with the serious approach of songs like “War is Kind,” a beautiful meditation. “Darkness in Mind” sounds like a great lost Rumours-era Fleetwood Mac track, with some lovely ensemble vocal work.

After taking listeners on the whirlwind musical trip that is Kindness, A Rebel, the group closes its set of 10 songs with “Mama, Take Your Time,” a return to the sound of River Whyless’ earlier work. Soaring in its ambition, Kindness, A Rebel succeeds at being the most varied and fulfilling work to date from this intriguing band.