Taj Mahal is a timeless artist who’s always been ahead of his time. The singer-songwriter-guitarist was making Americana and world music long before either musical genre had been coined. He’s earned many accolades—three Grammys, ten Grammy nominations, the Americana Music Association’s Lifetime Achievement Award, an honorary Doctorate—and released more than 30 albums under his own name.

His most recent project finds him working within the blues idiom, and collaborating with another acclaimed artist, fellow singer-songwriter-guitarist Keb’ Mo’. Released in May 2017, the duo’s album, TajMo, earned this year’s Grammy Award for Best Contemporary Blues Album.

Yet somehow Taj Mahal has not become not a household name. “I’ve been a performing artist all these years,” he says, “while the popular side of the music business has been record sellers. So they haven’t been out touring. I have been out touring, and I’ve always had my finger on the pulse of people in the live situation.” 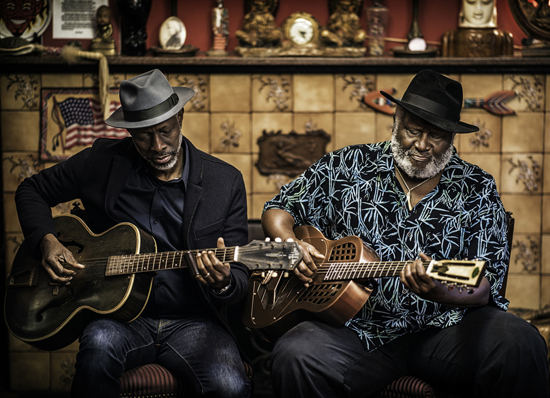 He says that working as a live performer sets him apart from those thought of primarily as recording artists. “It’s a different kind of scene for me, one where I’ve earned my living the old-fashioned way,” he explains. “I’m actually going out and playing 95 to 150 dates a year, and that’s been steady since the end of the ‘60s.”

And Taj Mahal’s body of work doesn’t fit neatly into most people’s idea of a popular artist: find a successful style, and stick closely to it. In one sense, his style is difficult to pin down. His albums have explored the traditional and pop music of the Caribbean Islands, his ancestral Africa and the south Pacific; with guitarist Ry Cooder he was in the Rising Sons, one of the first multiracial rock bands signed to a record deal. And he was co-billed with John Lennon and Jethro Tull in the 1968 film The Rolling Stones Rock and Roll Circus.

Taj Mahal doesn’t view his body of work as especially confusing. “I can take a guitar and go anywhere to the ends of the earth,” he says. “I can be in the steppes of Mongolia, and if I play what I play, somebody’s gonna say, ‘Oh, you play blues,’ because of the sound of the music. Most all of popular music is fueled by the movement of Africans into the Western world. And then that music went back out, and it has fueled popular music the world over.”

As an example, he points to his 1997 Grammy-winning album Señor Blues. “It’s a minor blues set in a kind of Latin groove. And it’s flat-out jazz!” To Taj Mahal, it’s all connected. “I grew up listening to all these kinds of music, and I could hear the roots connected to one another. You can’t spread African people between the North Pole and the South Pole in the western hemisphere and then have 420 years of development and all of a sudden say that they’re not connected,” he insists. “That’s kind of crazy.”

Like many musicians and ethnomusicologists, Taj Mahal thinks of music as universal. “It’s our intergalactic language,” he says. “You can go anywhere in the world: ‘I don’t know what they’re saying, but that sure feels good.’”

And Taj Mahal’s latest work—on record and on his current tour—with Keb’ Mo’ is an example of his fondness for creative collaboration. “It’s always been about playing together,” he says. “It took a village; that’s how I grew up. “I grew up with the bands of Basie and Lunceford and Ellington and Eckstine and Armstrong: all those guys.”

Keb’ Mo’ and Taj Mahal made TajMo their way. “We took our own money and took our own time in producing it,” Taj Mahal says with a warm laugh. “This was not sharecroppers on a plantation going up to the big house.”

No matter what style he’s working in at any given moment, Taj Mahal’s music always rings true, even if it doesn’t always conform to commercial norms. He uses a food metaphor to make his point: “So many of us have been trained by the commercial industry that if the oranges don’t look like they’ve been spray painted with orange paint, they might not be sweet! You don’t get the real thing any more.” But with the music of Taj Mahal, you always do.