Straight No Chaser: All Vocals, Hold the Instruments

Founded in 1996 when all of its members were students at Indiana University, a cappella group Straight No Chaser has gone through more than its share of changes. But the group’s unique, old-meets-new approach—all-vocal performances of original and classic songs with beatboxing—has endured and expanded its audience.

Widespread success was unexpected; the original ten members sang together from 1996 to 1999; after that, Straight No Chaser continued as a collegiate group with all new vocalists. But nearly a decade after it was filmed, a video of the original lineup performing “The 12 Days of Christmas” became a Youtube sensation; to date the video has been viewed nearly 22 million times.

In the wake of rediscovery, eight of the original ten members reunited, adding two members of the second collegiate lineup. In 2008, Straight No Chaser was signed to a major label recording deal. The group made its recorded debut with the seasonal themed Holiday Spirits. To date the group has released six studio albums plus four extended-plays; the 2017 EP Six Pack: Volume 3 is the group’s latest. 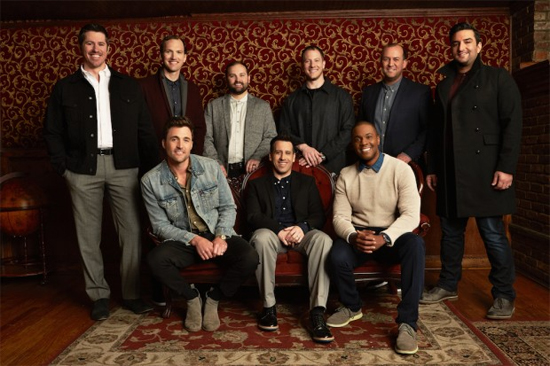 One of the original members, tenor and dance captain Steve Morgan, remained with Straight No Chaser through 2008; he subsequently left for a few years, returning in 2013. Asked to describe how the group has changed over the years, he quips, “I like to think that we really turned a corner when I came back.”

But then Morgan provides a more thoughtful response. “Over time we’ve just been refining our craft, figuring out what we do,” he says. “And so much of what we do is predicated on what the audience responds to. We’ve [learned] what they’d like to see from us, and we’ve tried to maximize those moments for them … and for us.”

With nine vocalists, there are ample opportunities to explore complex harmonies, countermelodies and bass lines. But with that complexity come challenges; organization is essential. “Some of the songs, you kind of slide through,” Morgan says. “Others—some of the more involved medleys and taking a song and trying to re-imagine it—those are more labors of love that will take a little more time” to develop.

Loosely speaking, the nine vocalists have assigned roles. “We have up to four guys who will do vocal percussion, for instance, in any given song,” Morgan explains. “The basses are generally relegated to the bass men, just because none of the rest of us can get down there.”

But there’s a great deal of versatility within Straight No Chaser. The lineup features five tenors, two basses and two baritones. “The tenors certainly can float around,” Morgan says. “And we do a lot of that, because we [create] all the arrangements ourselves. So we can try to put each individual voice on the part we think that would sound best for that particular song.”

In live performance, the nuances of the human voice can easily be lost or distorted. As a vocals-only ensemble, Straight No Chaser has to face that challenge head-on. “We use in-ear monitors,” Morgan says. “And we have an incredible sound guy who’s like a tenth member. He knows the songs in and out. So, from the moment that we start rehearsing, he knows how to mix our voices.”

In breaks between live performances, Straight No Chaser is nearing completion of its seventh full-length release. “We’ve been in the studio back in Bloomington, Indiana,” Morgan says. He describes the upcoming album (due in the fall) as “the most conceptual we’ve ever done. It’s kind of the story of us, through other people’s songs.” And for Straight No Chaser, that approach is one that has served the group well.

Because of the manner in which the group sometimes creates radical, innovative reinventions of well-known tunes, Straight No Chaser is likened to Scott Bradlee’s Postmodern Jukebox, the popular instruments-and-voice group that recasts contemporary pop songs in retro arrangements. And even the members of the a cappella group are sometimes surprised by just how well their own reinterpretations turn out.

“When you get a blending and interweaving of nine voices, some real thumpin’ percussion going, and some steps that heighten the performance value, then you say, ‘All right. We’re on to something here,’” Morgan says. “And those are great moments.”