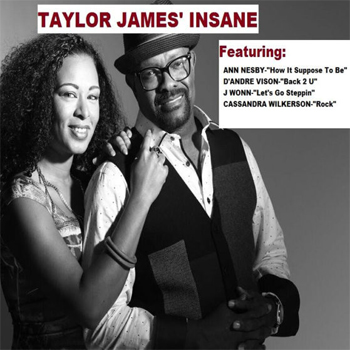 For me, the use of numbers and capital letters in place of, y’know, actual words is a red flag: it was kinda dumb when Prince did it, and it’s wholly unoriginal now, a generation later. So the discovery of the opening track “Back 2 U” caused me to lower my expectations in regard to finding much in the way of originality on Insane. The tune itself isn’t bad, but it’s nothing you haven’t heard eleventy-billion times before, a harmless and nice enough smooth r&b joint with slightly strange production values (at one point, those backing vocals are really loud!). Some of the tunes have a vaguely Stevie Wonder feel about them, though there’s nothing here that approaches his greatness. The keyboard textures seem straight out of a 1990s Kurzweil synth, and the styles seem to draw from acts like Earth, Wind & Fire and ‘80s r&b/pop.

Strangely, a few tracks feature what sounds like a control booth voice letting us know that here-comes-the-guitar. “Rock (Throw Back Mix)” featuring Cassandra Wilkerson is a tasty neosoul/dance number, but the production is oddly thin and tinny, calling into question why the title calls attention to it. “Good Times” playfully injects a bit of politics into the mix. The soulful slow jam of “Make it Right” features some slightly over-emoting vocals, but one supposes there’s a market somewhere for such a thing. Again, the balance of the lead and backing vocals seems way off. Overall, the production and mixing shortcomings make Insane sound like a rough mix. In this era of DIY production, there’s really no excuse for that. Spending more than five minutes on the album cover design might have been a good idea as well.

Still, the album actually improves at it unfolds; as long as one takes it for what it is, Insane is a pleasing way to invest three quarters of an hour.