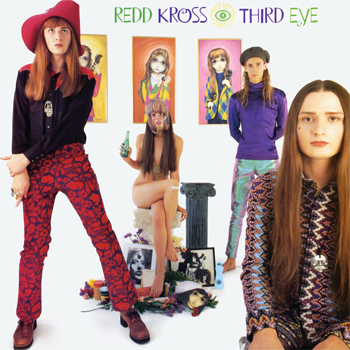 Redd Kross’ Third Eye was released mid-September 1990. Notwithstanding the pop singles charts (then topped by a Latin dance pop ditty called “If Wishes Came True”), the rock scene was dominated then by acts like Jane’s Addiction, Gene Loves Jezebel and the ubiquitous and gruesome “Joey” from Concrete Blonde. Into that relatively dour and joyless milieu came bratty punks the McDonald brothers (Steve and Jeff) and their formerly indie band, Redd Kross.

After some indie releases, the band from Hawthorne, California (home also to pop icons Emitt Rhodes and Brian Wilson) released a promising sophomore LP, 1987’s Neurotica, on the ill-fated Big Time label. But in the wake of the relative success of other tuneful alt-rock acts (Jellyfish, World Party and Michael Penn, to name but three), Redd Kross was signed to a major label, Atlantic. Third Eye was the band’s major label debut, and – as it turned out – effectively its major label swan song.

For Third Eye, the brothers and their musical cohorts (guitarist Robert Hecker and guests including The Three O’clock’s Michael Quercio and pop royalty Susan Cowsill) made a sort of musical love letter to past musical eras. Unlike Jellyfish, who focused their talents on an updating of Supertramp and Queen, for Third Eye Redd Kross’ musical touchstones included Elton John, Kiss and the more melodic AM radio pop of the ’60s and ’70s.

Highlights are many, and include the sweet pop singalong of “Bubblegum Factory” (featuring smooth-as-fresh-milk Cowsill harmonies), “1976” with its dual dead-on impersonations (Hecker channeling Paul Stanley, and a guest keyboardist aping Elton John’s updated Daryl Hooper-styled soloing), but there’s not a weak tune in the bunch. Critics ate up Third Eye like the sweet (yet often hard rocking) confection it was, but radio and retail remained largely indifferent, making the album an overlooked gem of its era.

Redd Kross continued, albeit without the alleged (but largely unrealized) benefit of major label backing. Returning to the ranks of the indies, the band released Phaseshifter in 1993; it rocked harder, swinging for the fences with arena rockers and aiming for a heavier sound. Show World from 1997 marked a sort-of return to the majors, but commercial success remained elusive. More than fifteen years would pass before the band released its next long-player, Researching the Blues, but that that point the band’s fate – critical plaudits but meager sales – had seemingly been sealed. Like many of their stripe, the band remains a bigger draw in Europe, though they sometimes schedule domestic dates and tours.

The album – which has worn quite well musically over the ensuing nearly three decades – has been newly reissued on green vinyl; the reissue is quite welcome, as original vinyl pressings from ’90 are scarce and extremely pricey.