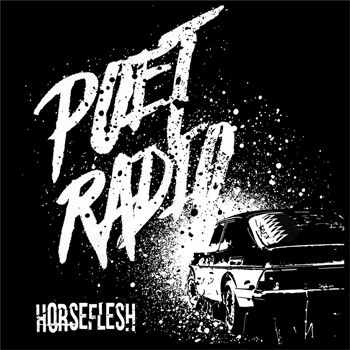 On the band’s website, Asheville-based Poet Radio describes itself as “a dark psych rock band with occultist undertones.” New listeners shouldn’t be warned off by that description; the trio’s new Horseflesh EP starts off accessibly enough and gets more even listenable as it goes along.

“I’m Clean” begins abruptly, almost as if the band had been playing and the recording engineer hit the “record” button a split second too late. The result is that it takes a few seconds for the listener to settle into the slinky and sinister – yet somehow alluring – vibe of the song. Madison Maxwell’s vocal approach seems to exist halfway between kittenish and menacing, giving the song just the right uneasy feel. As the tune unwinds, the hypnotic melody – propelled forward by Kevin Freeman’s heavy bass line – supports Maxwell’s vocal. Metallic electric piano notes notes effectively scrape the polish off of the song. And every now and then, when Maxwell vocalizes a note that’s outside the core cluster of notes, she adds a raspy, almost screaming texture. But almost as soon as it starts, it stops, with the singer returning to the primary vocal melody. Against the backdrop of how the song started, it’s fitting that the edit cuts abruptly as the final bass note is still resonating. The next effect of this admittedly curious editing technique is to give the feeling that the recording of “I’m Clean” is merely a snapshot, a capture in time, of Poet Radio’s complete performance.

“No Turning Back” launches with the rhythm section – Freeman and drummer Ryan Cole – laying down a foundation redolent of Gang of Four’s punk-funk-dance approach. Some stinging guitar leads from Maxwell puncture the funkiness and add a fuzzy texture of the sort one might find on 1980s psychedelic revival records by Rain Parade or Plasticland. Maxwell adopts a louder, more strident and forceful vocal demeanor here. And she sings the line “there’s no turning back,” the entire trio lurches forward, increasing the tempo and intensity. Maxwell leans into a wonderfully nasty (if intentionally rudimentary) guitar solo while the rhythm section vamps on a two-chord figure.

In the context of the two songs that precede it, “Crepe Paper Hearts” is positively poppy. Maxwell switches between a distorted and clean tone on her guitar, and sings in a soaring manner that occasionally recalls Blondie’s Deborah Harry. The song’s arrangement features clipped chords and restrained tension on the part of Freeman and Cole; the band loosens up for the choruses, adding pleasing contrast to what threatens to be the most accessible of the Horseflesh EP’s songs. The song’s outro features Maxwell’s overdubbed guitar solo; what may or may not be a mistake in the solo is nonetheless charming in its offhandedness.

In fact it’s “End of the Season,” the closing track on the EP, that best earns the title of Horseflesh’s most winning tune. It’s a curious strategy to sequence an EP in this way; perhaps the group’s thinking is to reward listeners who stick around by making each song better than the one before it. “End of the Season” features the strongest melodic line of the four songs, and Maxwell’s tinkling electric piano provides a nice contrast with the song’s other relatively fuzzy sonic elements; a solo toward the song’s end suggests the influence of Ray Manzarek. Again, Freeman’s propulsive bass subtly provides power to the arrangement. At the conclusion of the tune, the band stops on a dime, underscoring the trio’s single-minded and unspoken communication.