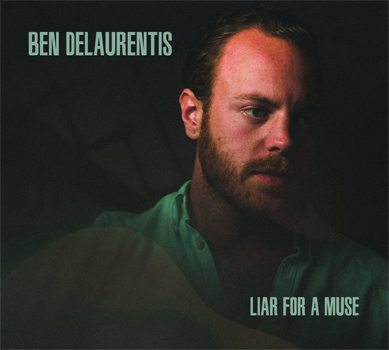 After making a trio of band albums, Lynchburg, Virginia singer-guitarist Ben Delaurentis has made a solo record in Liar for a Muse. But don’t assume that you’ll find a vice-and-acoustic vibe; Delaurentis has a pleasing sense for arrangement, and he makes the best of instrumentation and (especially) vocals. “As Good as it Gets” opens the album, and its familiar melody is enhanced by a great sonic palette – some subtle use of Leslie-effected guitars – and some lovely stacked vocal harmonies. Sometimes he has a kind of Paul Simon vibe, if Simon could write sexy, smoky and soulful ballads like “Fill in the Blanks.” Delaurentis switches effortlessly to piano (with some melancholy string accompaniment) on “One Woman Man.” The entire album has an easygoing, close-in vibe that makes the listener feel right there with the musician, and the tunes stand up to repeated listens. The introspective tone that Delaurentis strikes is an inviting one that reaches right into the hearts and souls of those who’ll listen.