Album Review: American Amnesia — …Yet Here We Are 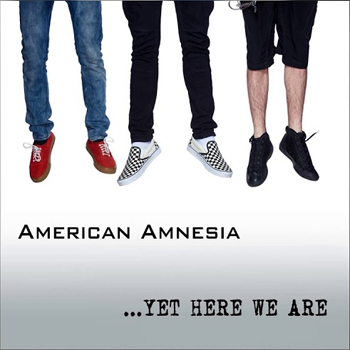 The band name and the album title might suggest to some that this is an album of sociopolitical commentary. Not so much: this Connecticut trio makes hard-charging rock. The songs often have more than one good idea in ‘em. To wit: the opening track, “Time,” sounds like two completely different songs grated together. One’s fairly conventional and quite good; the other is a frenetic spray of lyrics that has more in common with punk or, say, Violent Femmes. But together they work.

There’s even a subtly bluesy undercurrent to some of the tracks. Fans of sharp and heavy rock with plenty of variety should check this one out. There’s a sense of fun and reckless abandon in these songs, and the playing is whip-smart, exacting the maximum force out of the trio format. Cuts like “The One” show that the group has a good sense of melody, not unlike Dookie-era Green Day. The album reverts to a sort of arena-rock vibe for its relatively epic-length closer, “Stars of Orion.”