Johnny Tucker: Everything Comes from My Soul, Part Two 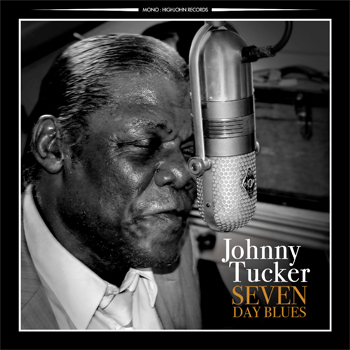 Walker, who scored a hit in 1959 with “Hello My Darling,” was playing in and around Los Angeles with a band featuring vocalist Bea Bop (Walker’s wife Ina). Tucker was still a teenager when he first met the guitarist/bandleader in August 1965. “I went to a club and I sat in,” he recalls. “And I did my James Brown thing.” Suitably impressed, Walker invited Tucker to join his band and head out on the road.

Walker had plans for Tucker to work as a featured singer. But as Tucker recalls, fate soon intervened. His days as a singer would end before they began, but a new opportunity presented itself. “This was during the time that the riots started in Los Angeles. We got all the way to Texas and stopped at a hotel. Our drummer called home, and his wife told him he better get home right now. So there we is, stuck out here on the road, ain’t even played one gig and we ain’t got no drummer.”

Young Walker saw an opening and took it. He told the bandleader that he could fill the spot in the band. “So Phillip Walker asked me, he said, ‘Well, Johnny, you think you can play?” I said, ‘I can play all that stuff y’all play!’” Walker gave him a chance. “And man, when I got on them drums I stayed on there 27 years,” Tucker says. “I played with Phillip Walker all over the world: Tokyo, Paris, Sweden. Everywhere you can think of, we played.”

“I never did get back out in front no more,” he says. “I just stayed on the drums all the time.” He notes that on the occasion swhen he’d take part in a sit-in with another act, he might get up and sing a bit. “But when I was behind Phillip, playing drums is what I was doing. I paid a lot of attention to that.”

Tucker notes that singers, guitarists and bassists get all the love because they’re close to the audience. “’Cause they sittin’ out there in the front. The poor drummer sat way back in the back and nobody’s listening.” But he recalls one night when things were different. “We were in Tokyo, Japan, and we were playin’ on a big old stage. There was a long line of people – really long – in front of the stage, and the way they had my drums set up, they were a little high and mostly in the front. So I started doin’ the moves, and I had the whole line! Everybody was movin’ in the same direction I was moving in, in time.

“I got the kick of my life out of that,” Tucker says. “I said, ‘Wow! They can see me now! Lord have mercy!’ How beautiful that was; they gave me love. It’s really a trip, the respect that musicians get.” But after his brief moment in the spotlight, it was back to the way things had been before. “Back again,” Tucker says with a belly laugh. “I wanted to stay out there in the front; it was ‘No way, no way!’ No, they don’t play that, they’re back there in their place; get used to that.”

In his travels, Johnny Tucker has enjoyed the opportunity to work with other artists, too. In Dallas he connected with The “5” Royales. He had just played his last gig at Big Bo’s Club, and returned to see the Royales’ show. “They were on the road, and they were missing one guy,” Tucker recalls. “And I told ’em, ‘Well, I sing background.’” He joined them onstage and became a touring member for a time. “We made a record called ‘I’m on the Right Road Now,’” he says. “I was singing lead on that song; I made that song up. I don’t know what ever happened to it.” (The tune was released in 1965 with “Mr. Moon Man” on the flip; both tunes are credited to band leader Lowman Pauling.)

He also mentions Screamin’ Jay Hawkins of “I Put a Spell On You” fame. “Screamin’ Jay: that’s what he was,” says Tucker. “He’ll scare you to death. But he really knew them blues, man. Everybody had their own style of blues, but you could tell the ones that’s been doing that style for a while, because it’s so real.” Tucker says that Hawkins was just such an artist. “He could start talking the blues to you, and you would stop and listen; you’d really listen.”

Not long after he played with Screamin’ Jay, Tucker picked up a gig with Johnny Otis’ band. He recalls working alongside the bandleader’s son, Shuggie Otis. “Yeah, Shuggie was in the band, a guitar-playing kid. He was a baby,” Tucker says. “He was the baddest young man I ever heard because he had ideas. You could hear those ideas come flying out of that guitar, man. You could hear it, and when you hear those ideas you’re going to listen because you ain’t gonna never hear that nowhere else. Those belong to Shuggie, and ain’t nobody else doing that like that, I don’t care how close they get to it.”

But even with his sit-ins and short-term gigs with other bands, for several decades Tucker’s primary commitment was to Phillip Walker’s band. “I was working with Screaming Jay for gigs, and Phillip would call me and tell me that he was getting ready to go out,” he says. “So I’d go with Phillip and play and come back. I was just the drummer that everybody knew. I had a good back beat on that blues shuffle; they loved that. I never did have a problem being with a group, because I just like to play. I just love it.”

Tucker’s years in Phillip Walker’s rhythm section paired him with bassist and vocalist James “Broadway” Thomas; after years working together behind Walker, the duo made an album together near the end of the 20th century. Their album Tucker & Thomas (also known as Stranded, after its standout track) was released in 1997 to positive reviews. And like his new Seven Day Blues disc, that album found Tucker using his spontaneous lyrical approach. “That’s the only way I ever did mine, was that way,” he says. “I just walked in the studio like I know what I was going to sing. But I never did know!”