Johnny Tucker: Everything Comes from My Soul, Part One

Do an internet search on Johnny Tucker, and you won’t find a lot of information that predates the release of Seven Day Blues, his new album on Highjohn Records. But Tucker is a veteran bluesman with a long and colorful back story. His musical journey brought him up close and personal with Screamin’ Jay Hawkins, the “Five” Royales, Johnny Otis and Phillip Walker, and took him all over the globe. After decades of literally taking a back seat to other artists, in 2006 Tucker embarked on a recording career of his own. Seven Day Blues is his second solo album.

Purposefully ignoring modern ideas about how to make an album, Tucker and producer Big Jon Atkinson cut Seven Day Blues live in the studio – using analog tape and vintage recording gear – with Tucker making the songs up as he went along. “I’ve got some pride in that, man,” Tucker says. “Because I did it freestyle, y’know? I didn’t come in there with no sheet of papers or nothin’.” In fact Tucker says that when he met up with the players for his studio sessions – various combinations including Anderson, Kid Ramos and Scot Smart on guitar, drummers Marty Dodson and Malachi Johnson, Troy Sandon on bass and harmonica plus a select few others – he gave them only the simplest of directions. “Put it in ‘G,’ and here’s the count, y’all,” he told his side men. “We took it from there; didn’t have no practice.” 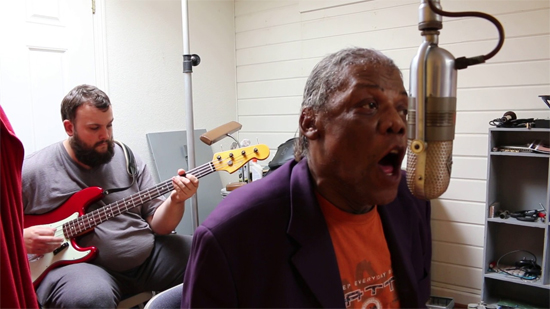 Johnny Tucker is clearly a man who believes that music is at its best when it’s captured in the moment. “I just told ’em, ‘This is the speed right here,’” he says. His extensive background as a touring drummer meant that he knew how to set the tempo and rhythm with a few hand claps; it was up to the players to pick up his cues and run with them. “I told ’em, ‘Listen, y’all. We can’t do it but one time. So you got to get it right this one time.’” Tucker laughs and admits that his approach in the studio is not only about spontaneity. “Because when I go back through it again, I been forgot the words that I said at the beginning! I get all turned around, and everybody’s tryin’ to get me: ‘What word did you say?’ And I say, ‘We’re going to do it. One. Time.’”

In light of Tucker’s methods, there’s a surprising amount of variety within the fifteen original tracks on Seven Day Blues. There are shuffles, slow blues, fast numbers. “Whatever timing that I counted out, that’s what they played,”Tucker says, beaming. “It was perfect.” And in nearly every single case, the first take of a song was the only take.

Tucker had the time of his life recording Seven Day Blues, and developed an instant rapport with the musicians on the session. “The drummer that we had there said, ‘Baby, you must’ve played drums!’” Tucker recalls. “And I said, ‘Yes, that’s what I did all my life!’”

Johnny Tucker was born near Fresno, California (some sources cite Modesto) on October 17, 1945. The bio on his label’s website calls him the tenth child of nineteen siblings; he says sixteen (“eight boys and eight girls”). Either way, with that many, it’s easy to lose count. “And we all went into music,” he says.” His own introduction to playing music came courtesy of one of his older brothers.

“When we were kids, we used to go out in the field and pick cotton,” Tucker says, telling the tale for what must be the hundredth time. “And by the time we get home, we’re so tired and tuckered out.” On foggy mornings, Tucker and his siblings would set some old tires alight, in the belief that the fumes would dissipate the mist. “We can’t pick the cotton when it’s wet, because then it weighs too much,” he explains. “Wet cotton in a sack is going to weigh twice as much as when it’s dry. So we had to stand around the fire until the fog comes down a little bit, it gets a little warmer, and the cotton gets dry.”

On one such morning, the tires were almost completely consumed. All that was left was some metal wire from the steel belts inside the tires. Seeing that wire gave Tucker’s brother an idea. “He went and got a board. He got a hammer, some nails and a Pet milk can, too. Back in the day those cans were so soft you could just squeeze them with your hand and they would just crumple up,” he says. “Then he put three nails in one end of the board, and three nails at the other end. And he took that Pet milk can, empty, and put it up under them strings that he had cut off and put on that wire.” By sliding the can back and forth under the taut wires, Tucker’s brother could get a tone that he liked. “You know, doot-doot-doot; like that. He’d tune it to where he wanted it at, and then he’d do the next one, and before you know it he’d be done tuned all of them, all of the lines.”

So now Tucker and his siblings had a primitive, homemade guitar. Tucker’s brother-in-law thought some percussion would be good, too. And he noticed young Johnny’s interest in that direction. “I’d be beating on old pots,” Tucker recalls with a laugh. “He liked my sister, so he said, ‘I’ll get you some drums.’” Tucker says it took him three full days to put the pieces together. “It wasn’t a full [kit] to set up, but I didn’t know where everything went,” he says. But once he assembled the drums, he put on Lowell Fulson’s “Reconsider Baby.” (Tucker refers to the song as “So Long,” by the words that open the tune.) “And I learned how to play that song with my drums,” Tucker says. “I played it every day until I learned how to play it just like the record.”

Tucker honed his drumming craft, but he was a singer too. And he had the moves. “I listened to a lot of James Brown; I used to imitate him all the time,” he says. “You know: one leg slide across the floor, doing ‘Please, Please, Please’ and all them songs. That’s how I got on the road with Phillip Walker.”