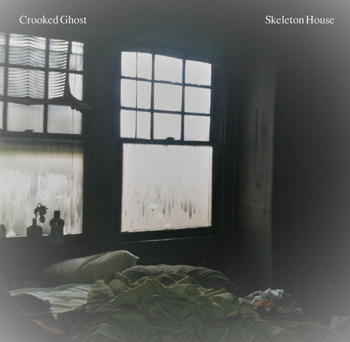 When artists describe their music (or have it described by others) as dream-pop, that’s usually a reliable signal that the mood of the music focuses on one of two musical perspectives: it’s either happy and ethereal or—more likely—minor-key, somewhat glacially-paced music that conjures an unsettling, foreboding and deeply textured mood. And by that measure, the latter is often possessed of greater depth and appeal.

The music of Asheville-based Crooked Ghost fits squarely into the second category. The quintet’s second and latest full-length release is Skeleton House; from its title to the mysterious cover art, the album telegraphs the intent and mood of the music.

The album opens with “Body in Stars,” a virtual tone-poem of a song. There’s a yearning, restless feel to the tune, delivered over a languid two-chord vamp. Two chords are clearly enough to establish and build the intended feel of the song.

“Sleepwalker” (not the Kinks classic; all eight songs on Skeleton House are originals) expands the group’s vision greatly. Where “Body in Stars” was a shoegaze meditation, “Sleepwalker” conjures a feel not unlike Echo and the Bunnymen or the Cult; building slowly, the song unfolds into a melodramatic presentation that suggests the best of ‘80s goth-rock.

On many tunes, lead vocalist Ray (the band’s online info only notes band members’ first names) seems to use bits and pieces of lyrical phrases as a means to put across a particular emotion, rather than as a storytelling device. In this way they share a quality with R.E.M.: words as pieces of the sonic puzzle.

But that’s not always the case: “Only Nightmares” employs a more conventional lyrical approach. Here as elsewhere, the vocals effect a vaguely British character. But as the song develops, wordless vocalizations occupy the space traditionally filled by a chorus. A clattering yet hypnotic guitar figure contrasts with a second guitar that’s fuzzily distorted, recalling the Jesus and Mary Chain.

“Catch Fire” threatens to reveal itself as a pop melody. The song’s opening “ba-ba-ba” vocals underscore that idea. But the dark and moody ambience of the tune doesn’t deliver on that threat; it’s a nervy, insistent piece of music that envelops the willing listener in a somnabulant reverie.

“Witch Heart” is as close as Skeleton House comes to a conventional pop song. And it’s not very close at all. Ray’s bleating vocal is out front, and some exceedingly unnerving screams buried deep in the mix ultimately make it the album’s most disturbing piece of music. But in the context of this album, disturbing is a plus: it’s obviously the desired effect. Spoken-word bits are submerged even farther into the mix; near the song’s end when the instruments fade to silence, those words remain as murky and indistinct as ever. That approach calls to mind director Alfred Hitchcock’s belief that implying terror is, in the end, more frightening than actually showing it onscreen.

The dirge that is “Black Cat” threatens to take the doom-and-dread too far; it feels like an underdeveloped example of the ideas put to better effect on the album’s other tracks. Unfortunately, at nearly six minutes “Black Cat” is the second-lengthiest cut on Skeleton House. Here, Ray’s theatrical warbling threatens to go right over the top.

The woozy aesthetic pervading Skeleton House continues right through “Roadkill.” Rather than delivering anything remarkably new or different, the song instead builds on the established character of the album. But it does so with lyrics that are a shade more distinct than what’s found on the other songs. The Doors’ “The End” has likely provided inspiration to this group.

The album concludes with its title track. Keyboards (of the string-ensemble and synthesizer pads variety) played by the surname-lacking Alexandra provide a welcoming bed for the chiming and ominous tune. A pair of overdubbed vocal lines twist slowly and menacingly around one another like two venous snakes preparing to strike.

It’s an impressive feat to craft an entire album’s worth of music while limiting the arrangements to little more than two chords for each piece. With the moody and mysterious Skeleton House, Crooked Ghost succeeds, and does so without edging toward monotony in the process.