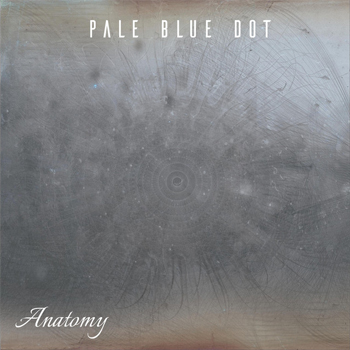 From a music standpoint, Charlottesville, Virginia is perhaps best known for the jam-band hero Dave Matthews (who’s South African, but is associated with the city). Appalachian music plays a part in the city’s scene as well. So Pale Blue Dot is something of an anomaly. Hard-driving melodic rock and concise songwriting are the hallmarks of the group. Soaring tunes are the specialty of leader Tony LaRocco, and on Anatomy, the band’s debut full length (there was an EP in 2016, reviewed here), he delivers.

“I Know” sounds like a single in the vein of vaguely alternative ‘90s rock. “Only Love” sounds like a cross between The Cure’s “In Between Days” and John Mellencamp, if you can imagine such a thing. Oddly, it works. Anatomy is a varied set of songs, unified around a rock aesthetic. LaRocca’s raspy yet supple vocals are the mortar that holds the bricks (songs) together as a cohesive album.

The instrumentation is taut and expressive, but for the most part the musicians – LaRocca on guitar plus Peter Balogh on guitar, bassist Drew Pompano and drummer Darby Wooten – never call attention to themselves, instead letting the songs be the focus. Story-songs like “The Harlot and the Gambler” take awhile to unfold, but that simmering slow burn approach is an effective technique. “Lo and Behold” subtly makes use of mandolin and pedal steel; it’s slightly out-of-place on this album, but in the end the song’s quality — and one of LaRocca’s strongest vocal turns — justifies its inclusion. (A brief unlisted, unnamed one-chord instrumental coda closes the album.)