Andrew Scotchie and the River Rats recently debuted their third album, Family Dynamo. The album represents a step forward for Andrew Scotchie & the River Rats. “It definitely has more of a theme” than the band’s previous efforts, says leader, songwriter and guitarist Scotchie. “The production is better, and I feel like it’s going to attract people who maybe didn’t like the last album.” He describes Family Dynamo as “not just a rock album. It’s a little bit more artistic and thought-out.”

The group’s third release does showcase a noticeable shift in the character of the band’s music. “We’ve listened to so much more since the last studio album,” Scotchie says. Drummer Eliza Hill adds, “We’ve gained so much perspective by being able to travel, and play different festivals and venues.” The addition of bassist/keyboardist Keith Harry has made a difference as well, Scotchie says. 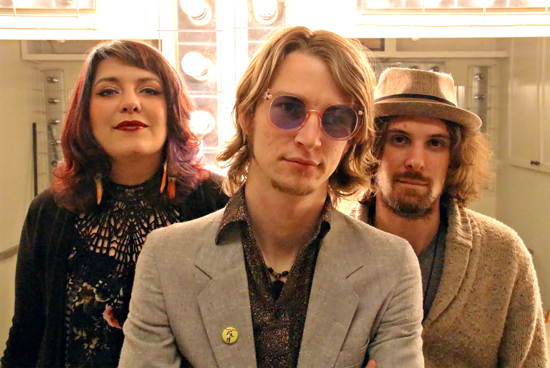 Bluesy, melodic rock is a hallmark of Family Dynamo, but it’s varied: “Heartless Games” is Scotchie solo, and on the brief instrumental “Upside Down” the guitarist channels his inner David Gilmour.

And while some groups write in the studio, Scotchie takes a more traditional approach. “You have to road-test the songs,” he says. That has been the River Rats’ approach since the beginning. “We used to play these long bar gigs, and we’d have all this extra time,” Hill explains. “So we’d just kind of jam and make up stuff on the spot.”

In those days, the group didn’t have enough material for a four-hour show. “So we kind of didn’t have a choice,” Scotchie says. Today the group’s more focused, professional approach applies to making albums as well. “It’s not really a record until it’s released,” says Harry. “It’s a whole process—pre-production, packaging, all that—and you have to see it to the end.”

The group’s own history tracks with the growth of the Asheville Barnaroo, a festival Scotchie launched in 2009. Today a thriving annual event, it had humble beginnings. “We started it in my mom’s back yard in Weaverville,” Scotchie recalls. “We did as much as we could there until we ran out of parking, the cops got annoyed, and I almost got taken in for a noise violation.” Since 2013 the festival has been held in September at Franny’s Farm in Leicester.

Though the group plays its share of club gigs, the River Rats are often at their best onstage at festivals. “We love Asheville very much, “Scotchie emphasizes, “but when we started getting out in front of new people in 2013 or so, building fans outside of town, that was a huge turning point.”

Andrew Scotchie & the River Rats are beloved locally; the band won Mountain Xpress’s Best of WNC award three years in a row for “Best Rock ‘n’ Roll Band.” But those accolades don’t mean as much when the band travels to other locales. Hill notes that the band has to work even harder to win over crowds outside of the band’s home base. “You always put your best foot forward,” she says. “Because people may not think twice about you if your performance is half-assed.”

The album’s title refers both to Scotchie’s own nuclear family—his late father was known as the “family dynamo”—and to what the group considers its extended family of friends and supporters. “I feel like we’ve created a huge network just through doing what we do,” Hill says.