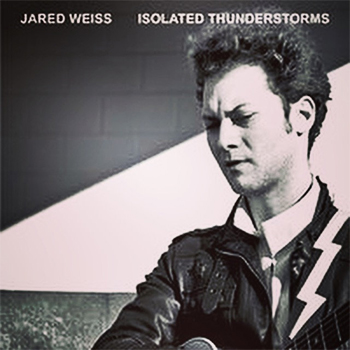 The press kit tells us that Isolated Thunderstorms began its life as a folk record, and evolved into a rock one. I’ve no particular reason to doubt that sequence of events, but what I can tell you is that the song construction owes a lot more to rock and pop than to folk. Though exceptions are many, folk places emphasis on the words, using familiar (often really familiar) chord sequences to deliver those words. At its best, pop makes effective use of melody.

And really, that’s what Weiss does here. Sure, on cuts like “Annalu (From Monterrey)” he employs acoustic textures. And the story-song is interesting. But there are timeless pop values within Weiss’ musical approach. At times his style reminds me of Jules Shear, they original host of what became MTV Unplugged and a superb songwriter.

And an intelligent pop persona reveals itself on “Get out of My Head,” in which Weiss conjures thoughts of Ben Folds, Owsley and even Jellyfish. Three songs in, he’s effectively trafficked in three very different musical styles. The thing is, they all seem to fit him naturally; Weiss doesn’t come off a dilettante; he explores different genres (or subgenres) in a way that seem natural, unforced and genuine.

That pleasing variety continues throughout Isolated Thunderstorms’ eleven songs; Weiss’ voice is the primary unifying element, and his sharply-crafted lyrics are the glue that holds the album together.