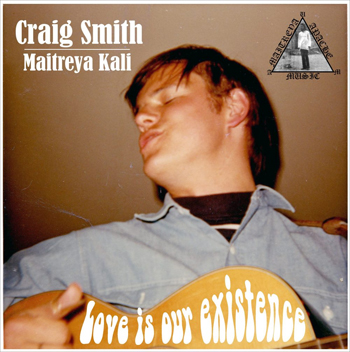 This is a fascinating release. Singer-songwriter Craig Smith got his early professional start as a member of the Good Time Singers, a folk ensemble in the mold of the New Christy Minstrels. He later formed a folk-rock due with band mate Lee Montgomery. Meanwhile he had an acting career; liner notes author (and album curator) Mike Stax says Smith was short-listed to be part of the foursome known as the Monkees. That didn’t happen, and he went on to join a pop-psych group called the Penny Arkade.

His life took a bizarre turn after that: his tale of LSD experiments and becoming the victim of a brutal attack while hiking in Asia are fully chronicled in Stax’s book, Swim Through the Darkness: My Search for Craig Smith & the Mystery of Maitreya Kali. Without getting into too much detail, Smith – who changed his name to Maitreya Kali – was never the same. And he went on recording, between extended stays in psychiatric hospitals.

That far-too-brief thumbnail sketch might give you a hint as to the kind of music Smith made, all of which is collected and showcased on this single-LP set. Yes, it may remind you a bit of Skip Spence’s Oar. And it has some similarities to Roky Erickson’s solo work. But it’s neither as haunted nor as ramshackle as either of those artists’ most haunted work. Smith had a fine and versatile voice, and a pretty solid pop sensibility. His songs – most of which feature just him and an acoustic guitar – sport attractive melodies and his lyrics really aren’t all that far afield from the hippie-folk style of the period.

And Smith’s guitar playing is lovely, providing just the right instrumental backing for his gentle songs of love an mysticism. Smith’s songwriting style is more complex than that of your garden- or commune-variety hippie folskter. His picking is assured, and his chord shadings are never less than interesting. There’s a vaguely unsettling vibe to some of the songs, but for the most part Love is Our Existence is a fine collection of original tunes. Some recordings are sourced from scratchy, worn acetates; “A Father’s Christmas” is one such tune. It features some vaguely peachy lyrics, but nothing too off-putting.

Stax compiled this set of home tapes with the cooperation of Smith’s survive siblings; this is a lovingly-assembled, non-exploitative collection of the man’s unheard work. Love is Our Existence is recommended for fans of the style, and to anyone with a deep interest in some of the darker corners of the late 1960s music experience.