Album Review: The Last Poets – Understand What Black Is 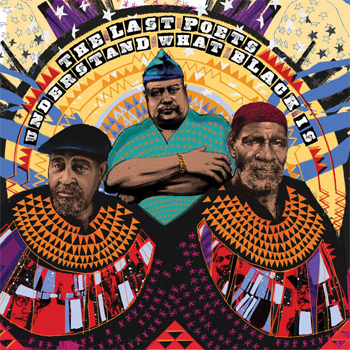 One lens through which one can view hip-hop/rap is as spoken word with musical accompaniment. Though there are myriad exceptions to the rule-as-such, lyrics are often the primary focus of hip-hop, while the beats and melodies (if any) are secondary. Of course that’s not to say that plenty of care and effort don’t go into that accompaniment, just that it’s not the conceptual starting point.

That perspective is perhaps a useful one for approaching Understand What Black Is, the latest release from the Harlem-based spoken-work collective that is The Last Poets. Begun at the height of the black nationalist movement in the United States (circa 1968) the Last Poets are a loose aggregation of poets and musicians. The “original” Last Poets featured Felipe Luciano, Gylan Kain and David Nelson.

Some 20 albums (for nearly as many labels) would come forth from the fertile creative ground of the Last Poets. While each has its own character, the albums are unified in their incisive chronicling of the black experience in America. The latest Last Poets release – and the first in nearly two decades – is Understand What Black Is, a 2LP collection of poetry and free verse featuring Abiodun Oyewole and Umar Bin Hassan, written by them plus Benedic Lamdin (co-producer), Dub Judah (bass), Winston “Horseman” Williams (drums) and Riaan Vosloo.

The verse is fascinating and dense; happily, the 2LP gatefold package includes lyrics (though listeners of a certain age may need a magnifying glass to read them). The music is hypnotic, often deeply immersed in a reggae style. Customarily, this reviewer has a more than mild distaste for the repetitive nature of reggae, but in this context it’s more than perfectly suited to the spoken words.

There’s a pleasing variety to the instrumental work, one that would likely hold up even without its paring with the arresting lyrical content. But in the end, it’s that content – delivered in tracks with titles like “How Many Bullets” that makes Understand What Black Is an important and completing work. Think of it as eloquent reportage from the front lines of American society.